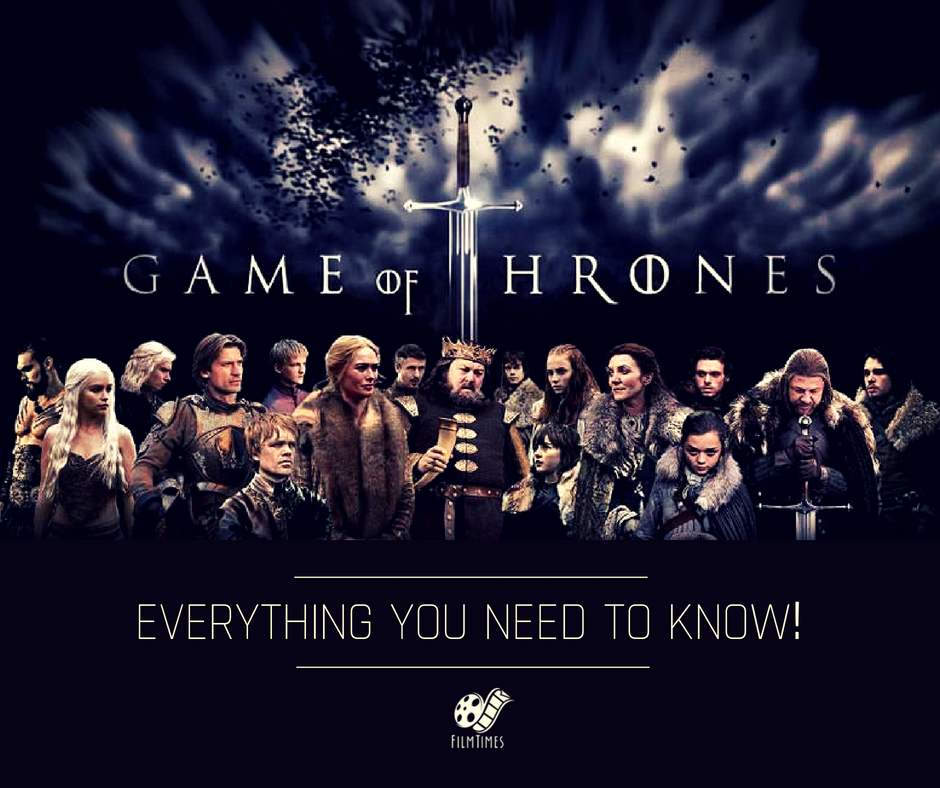 Everything You Need To Know About Game of Thrones(GoT)

You are sure to expect the unexpected twist and turns when watching every season of the Game of Thrones. HBO’s one of the biggest blockbuster’s last season was nothing more than a roller coaster ride with a lot of oooh and aahh! As the end game is near, major characters have been dropped off the ship and king in the North (Jon Snow) , Queen of Seven Kingdoms (Cersei Lannister) and mother of the Dragons (Daenerys Targaryen) are taking respective charges of their own throne as well as the white walkers are heading towards those humans who are intermingled among their own disputes.

Keeping a track of all the 100 characters each with its utmost importance can become a tedious list to maintain. The magical and fictional land of Westeros has a history that goes back thousand years. Let’s acquaint you with all the to know events, death and what made ‘Game of Thrones’ the most awaited show of all time.

Season 1: When the Starks smiled, for the last time!

Major Deaths: Ned Stark’s beheading literally caused a pool of tears world over, Robert Baratheon’s death by a boar left everyone wondering as to the king of seven kingdoms died that way, Viserys Targaryen’s head was covered with hot molten gold as his priceless demand with that of a king’s rule and lastly Khal Drogo got cursed by a white witch?

Every show or series needs that one righteous character or characters which make the show fall under the great light, for Game of Thrones that’s the Stark family. These characters are the very raw and first characters you get introduced to as the show begins. In the beginning, you actually feel that the show is all about the Starks. All praises to the series of unfortunate events through which made the Starks spread all over Westeros.
Need the Starks whereabouts? Here’s what happened in the Season 1

Ned Stark: Beheaded while two daughters are left unprotected in King’s Landing.
Catelyn Stark: On a path of revenge and hostility post-Ned Stark’s death with her Rob Stark to King’s Landing.
Robb Stark: Eldest of the Stark ready to avenge his father’s tragic beheading with the north behind him to fight for him.
Sansa Stark: Stark lady gets engaged to a narcissist and psychotic king Joffery getting physically and emotionally drained.
Arya Stark: The youngest but the brave stark runs away from cerise and is on her way to the Wall to find her Jon Snow the bastard of Ned Stark.
Jon Snow: The bastard who has sworn his life to protect the wall.
Bran Stark: The second Stark son who is bedridden after being pushed from a high tower by Jamie Lannister.
Rickon Stark: The youngest of the Stark siblings is stark that is mostly seen somewhere while the story is taking its pace.

Season 1’s core story is mainly centered on the Starks being scattered around. Meanwhile, the season’s curtain falls down when Daenerys Targaryen stands in midst of the fire with three hatched eggs which are nothing but three baby dragons. The death of Robert Baratheon makes one of the hated conclusion’s the iron throne has seen by Joffrey Baratheon being the next in line for the throne, and lastly Ned Stark’s revelation of an incest relationship between Jaime and Cersei Lannister and their three children (Not from Robert Baratheon).

Season 2: Season of the Lannisters

Major Deaths:
Renley Baratheon, Robert Baratheon’s brother – One more brother who gets killed in an anonymous way by an evil smoke monster.
Starks with being scattered now, the show gives us a shift from the righteous family to the most powerful family ‘The Lannisters’ who are the owners of Casterly Rock. Power is what drives them. You also get aquatinted with the battles of the Baratheon brothers and cruelty of the Greyjoys.

Season 3: Where love dies with your favorite characters dying!

The season that actually stabbed everyone’s heart. Rob Stark’s gets into all the more worse circumstances when Lady Stark refuses to release Jamie Lannister. Then the Red event occurs with killing everyone you love. Theon Greyjoy gets pushed into insanity by Roose Bolton’s bastard.

Season 4: This is where Justice reigns

Major Deaths: The oldest Lannister gets killed by his dwarf son Tyrion Lannisters, Iron throne claimed by Joffery was poisoned at his own wedding and Lysa Arryn sister of Lady Stark gets pushed out of moon door by Little Finger (Petyr Baelish).

This season served justice to major characters who died and also showcased death of major characters. Characters are met with the disastrous fate. Tyrion Lannister uncle of Joffrey Baratheon has forced a trial for a crime he didn’t commit.

Season 5: When Jon Snow died and the world stopped breathing!

Major Deaths: The Baratheon family comes slowly to an end when Stannis Baratheon is killed by Brienne of Tarth, Shireen Baratheon killed by her own father’s blind faith on a witch and Selyse Baratheon hanged herself seeing her daughter being tortured to death and Myrcella Baratheon poisoned to death. Meanwhile Sansa Stark is on a run after being sold off to the bolt-ons.
Season witnesses fall of the house of Baratheon with Starks trying to get back on their feet.

Season 6: You finally get hold of everything you ever wanted and oh yes Jon Snow is ALIVE!

Major Deaths: Roose Bolton (gets what he sowed and is stabbed by his own son Ramsay Bolton). The north comes for the house of Frey when Arya Stark slits the throat of Walder Frey. While Cersei Lannister blows the scepter killing the house of Tyrell. Baratheon clan comes to an ill ending when the last Baratheon King Tomen jumps out of the window.

White walkers & guards of the wall get into a heavy battle and get outnumbered. Daenerys Targaryen comes to the rescue but the Dragon is hit by the Night King and the Dragon wakes up with a blue eye. Jon Snow labeled as bastard is not a bastard anymore but he is the Mad king’s Son Aegon Targaryen. Daenerys and Jon Snow get into an intimate Moment while Cersei Lannisters gets pregnant and Jamie Lannister leaves for the North.

So how did you enjoy the recap of all the episodes and all the seasons? All the characters have jumbled up inside your head? Well, re-read the article once again and it might make better sense to you. I hope you have a great time watching the next season. Oh, wait! Did you know that this season doesn’t have 10 episodes but only has 6 episodes? Well, don’t be disappointed because the makers have extended the duration per episode. So you now are going to enjoy this gripping tale for a little longer till you die time and again waiting for the next episode.

Before signing off, here is something that I want to tell all you Game of Thrones fans – Winter Is Coming.