Summary: The world finally gets to know the reason behind Kattappa killing Bahubali. 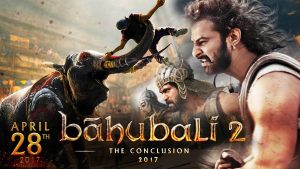 The most expected day of 2017 has arrived. The second part of Bahubali hit the theatres this morning.  S.S Rajamouli’s magnum opus Bahubali: The Beginning put Indian movies on the world movie map. The movie garnered appreciation throughout the world for its stunning visuals, great narration, and its famous cliffhanger ending.

It is a story about two cousins who battle it out for the throne of the Mahishmati kingdom. Shiva/Shivudu is bought up by a couple whose village is located at the bottom of a 1500 ft majestic waterfall. The adventurous Shiva climbs the waterfall to pursue a beautiful girl he sees in his dreams. He reaches Mahishmati and meets Avanthika, the girl of his dreams. She is a tribal warrior who belongs to a group that fights to rescue princess Devasena. Princess Devasena is imprisoned and chained by the cruel Ballaladeva/Pawaladevan. Shiva gets to know that he is the son of the late King Bahubali, and his wife Devasena.  The royal slave commander-in-chief Kattappa narrates the life of Bahubali to Shiva. King Bahubali and Pawaladevan fight against a king who attacks Mahishmati. The queen Sivagami declares Bahubali as the king. This does not go well with Pawaladevan. He begins to plot against Bahubali. Kattappa reveals that Bahubali is dead and that he killed Bahubali.

The sequel involves a number of flashback scenes. Bahubali (Prabhas), the soon-to-be-crowned king visits a village to learn about the problems of the commoners. He meets Devasena( Anushka Shetty), the princess of Kuntala. He falls in love with Devasena and takes her to Mahishmati, but in a twist of events, Queen Sivagami (Ramya Krishnan) declares that Pawaladevan (Rana Dagubatti) will be crowned as the king, and not Bahubali. The reason behind the queen’s change of mind, the relationship between Devasena and Bahubali, and the reason behind Kattappa killing Bahubali are revealed in the rest of the movie. 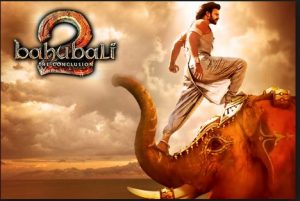 The director S. S Rajamouli has done a brilliant work. The screenplay is good. After the major twist in the story is revealed, the movie becomes quite predictable. The film runs for a good 2 hours and 51 minutes which is a little longer than regular movies, but the grandeur of the movie keeps the audience glued to their seats.

Though Ramya Krishnan’s characterization is not very tight, she has done an amazing job. A bit of humour has been induced in Kattappa’s character, and Sathyaraj is known to pull off multi-layered characters with ease, and Bahubali 2 is not an exception. Nasser fits the role of a menacing royal. Tamannah appears only in a few scenes. Prabhas has done a wonderful job. Anusha Shetty excels as princess Devasena. The South Indian film industry is yet to find a better actress than Anushka to do historical roles.

The movie is full of breathtaking visuals and extravagant sets. The cinematography is top-notch. The VFX teams deserve a special mention for creating the magnificent Mahishmati. The background score is great. The songs are good but not as good as the songs in Bahubali 1. The importance given to the costumes, make-up, and props show the great amount of effort the team had put in. The dialogues are impressive. It is India’s first 4K high definition movie. The picture quality is outstanding.

The actors are brilliant. A majority of the cast have gone through rigorous workouts to sculpt themselves. All the actors look their part. The story, direction, cinematography, and background score are the major positives of the movie. The only negative point is that the story becomes predictable after a point, but it drowns in the magnificence and brilliance of the movie. Bahubali: The Conclusion is a must-watch.