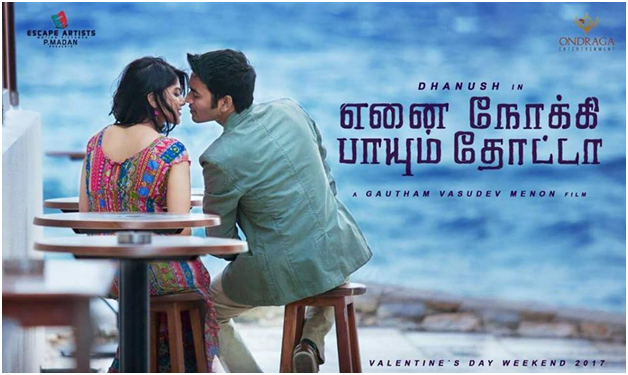 Like all other Gautam Menon movie teasers, Ennai Nokki Paayum Thotta teaser generated a lot of excitement amongst youngsters.

A narrative by Dhanush plays through the length of the teaser. The teaser begins with Dhanush walking with a gun, and his voice playing in the background. He says that a bullet is going to lunge towards him, within the next 50 seconds. The dialogue seems too poetic to describe such a situation, but it can be overlooked, considering that it is a teaser.

The flashback is played in bits and pieces. Dhanush looks like a college student. The female lead Megha Akash is introduced as Lekha in his narrative. From his narration, we infer that Megha is Dhanush’s girlfriend, and she is in some sort of deep trouble, and Dhanush gets involved in the situation, to solve the problem. The trouble makers do not seem to be petty thugs. Whatever the situation Megha has got herself into, seems to be very serious. We also get to see Dhanush thrashing a couple of people in an elevator. The background score goes well with the teaser. Dhanush looks young and fresh. Megha fits the description of the regular high-profile GVM heroine. The teaser strongly reminds us of GVMs previous movie, Accham Enbadhu Madamaiyada. The best part of the teaser is the ultra-quick cuts played just before the title card.