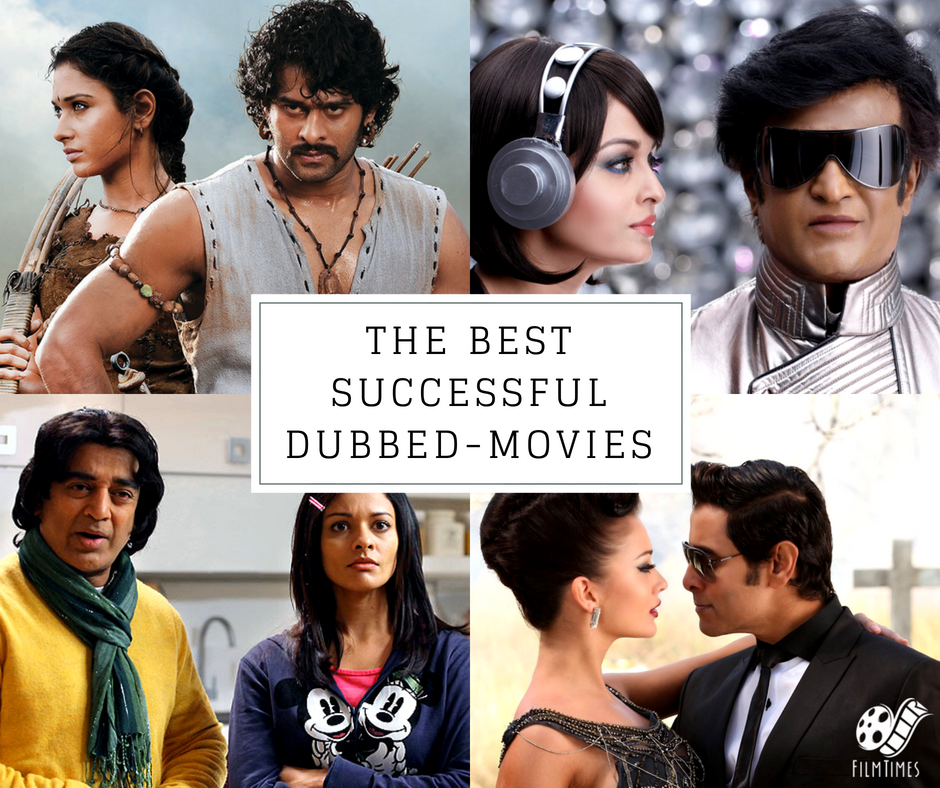 There are many movies which are originally blockbusters in their regional languages, however, they attained great heights of success even after being dubbed in Hindi. Few such successful dubbed movies are mentioned here.

This movie is on top of the list in the order of total collections. Its collections crossed all dubbed movies collection put together for the last twenty years. Released in 2015, in its first month it crossed 300 crores worldwide 65 crores in its dubbed version.
The only spoilsport for Baahubali was Bajrangi Bhaijaan by Salman Khan, which was released a week later of the release of the former.
Rajamouli, who is a great showman of the south industry, created a benchmark which would be pretty difficult to achieve in future.

Just before Baahubali could break all the barriers, Shankar who is another showman of the South created Robot (Enthiran in Tamil). The Rajinikanth starrer with a sci-fi concept became heavily popular across the country and outside the nation too. It collected a whopping 20 crore. The other stars on the cast were Aishwarya Rai Bachchan and Danny Denzongpa.

Kamal Haasan and Pooja Kumar starrer, this espionage thriller took the box office with surprise with a collection of 19 crores. It gained heavy popularity in its Tamil as well as all dubbed versions including Hindi.

Shankar is unstoppable, his Vikram starrer ‘I’ was a hugely successful project. This movie’s success was also due to the great marketing done before its release. Amy Jackson played the female lead. This film grossed 18 crores at the box office.

Mani Ratnam’s magic which was released more than two decades ago was the only movie from the South which ever crossed the 10 crore mark for many years to come. Arvind Swamy and Manisha Koirala starrer made with the backdrop of the Bombay riots, this movie is still a favorite to many due to its screenplay and enchanting music.

Kamal Haasan playing both father and son, this movie took fighting corruption to a new level. Shankar’s creation again, the co-stars were Manisha Koirala and Urmila Matondkar. This movie’s success was visible in its collection of ten plus crores. A.R Rahman’s music was also one of the highlights of the movie.

This movie was like the pioneer of Hindi dubbed south movies. Madhu was already known to the Hindi audience due to her role in “Phool Aur Kaante” alongside Ajay Devgun. This movie was also the Launchpad for A.R Rahman in becoming a national level artist. The other very important factor was; this movie was by far the only big project ever on the Kashmir valley issue.

This Rajinikanth starrer was released the same day as “Jhoom Barabar Jhoom,” however performed much better on the box office. It did surprisingly well in the Mumbai and the Delhi markets.
This film is known to be Rajinikanth’s entry into the list of most watched actors with the new generation. The dubbed version collected eight crores.

Urvasi and Mukkala tracks took the country with a storm. TV channels were playing these tracks with their videos, and some special effects newly introduced into Indian movies were also a surprise for the audience. The Tamil version was called “Kadhalan.”Nagma was already popular with Hindi audience, however, Prabhu Deva became a household name all over India, with many youngsters trying to copy his style of dance.

This is a successful dubbed movie, which is not from the south of India. It is about a Sikh Guru and his four sons, which made forty crores worldwide. This is an animated movie and collected three crores in the Hindi version.