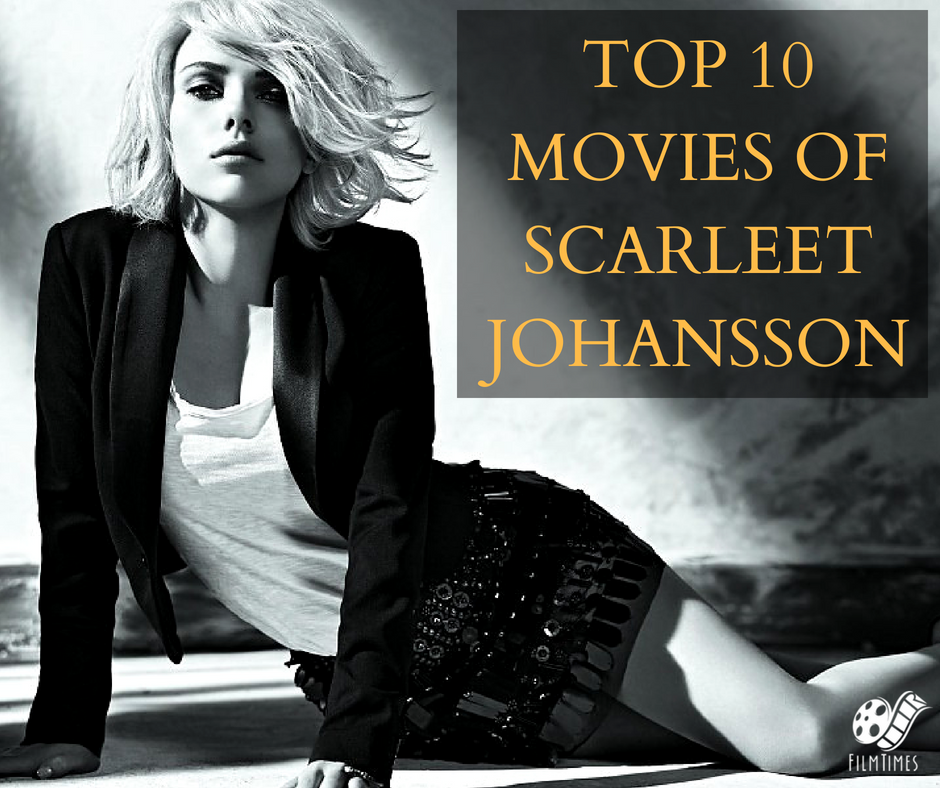 Scarlett Johansson is probably one of the most famous female actors in Hollywood. Since her debut in 1994 at the age of 10, Scarlett has been seen as an excellent talent that has acted in various versatile roles at ease. Not just an actor but also a musician and singer, this young talent does way more than acting. She is also said to be one of the most paid actresses in American cinema, especially for her bold and outstanding performances in almost every role entrusted in her. Although Scarlett has given way too many box offices, here is a list of the 10 major hits of this femme fatale! (in no particular order)

As a huge step for a budding actress, Lost in Translation was the biggest break for Scarlett. Directed by Sofia Coppola, starring Bill Murray and Johansson, this movie was nominated for various Academy Awards. In this movie, Scarlett Johansson plays the role of a young college graduate whose husband is the lead photographer of Bill Murray’s ad film that is to be shot in Tokyo. Although the movie is paced slow, it captures the emotions of the characters very beautifully. Being Scarlett’s first movie away from the teen drama, this was a huge stepping stone in her career. The movie mostly received positive comments but there were a few critics who said the movie showcased Japanese people in a bad way and other comments on the depiction of the characters as well.

Her is one of the most advanced movies of all time, beautifully depicted romantic drama between a man, played by Joaquin Phoenix and an AI computer operating system more like Siri, voiced by Scarlett. Even with no screen presence at all in the movie, just by her voice Scarlett led this movie in a totally different dimension of love. This movie is pure, gorgeous and definitely lures one to feel different emotions throughout. Another masterpiece brought to success by Scarlett, ‘Her’ was also nominated for various awards as well. This movie is definitely a perfect example of the human relationship with technology!

This easily can be said as the best part of Scarlett’s career. Scarlett joined the Marvel universe in 2010 as the Black Widow in Iron Man 2. The femme fatale in Scarlett after a series of dramas was unleashed in this movie. By far, the introduction of the Black Widow is said to be one of the best among all Marvel Characters. Since then, Black Widow has been a very predominant part of the Marvel Universe. She has appeared in almost all the Marvel movies except Guardians of the Galaxy. Though Black Widow is no female lead but just a supporting character, she still remains as a factor that keeps her team together.

This is one of those movies being a box office failure, still was able to receive positive comments from the audience and critics for Scarlett’s outstanding performance. In this movie, she plays the role of a “species” of not exactly anything that is explained. A species that takes the form of a lady just to lure men and drown them in a liquid abyss. The movie had lost the story and missed the point in way too many places but Scarlett kept pulling back her audience with her performance. And for that reason, the movie has got various recognitions and also titled as one of the best movies of the 21st century.

This movie dates back to 2001 when Scarlett was still doing teen dramas. This movie is a black comedy based on a comic by the same name written by Daniel Clowes. It is set to be the story of two teenage misfits (Scarlett Johansson and Thora Birch), best friends who split when Birch favours an older man to help him through his relationship problems. The movie is said to be witty and sophisticated at the same time.

After making several movies with Woody Allen, Scarlett starred this movie as one of the two American girls (other being Penelope Cruz) who go on a trip to Barcelona only to meet an artist who they are attracted to. Although the artist is attracted to both the ladies, he is a man with a bad and unstable marriage. The movie was almost a box office hit because it covered real-life problems that the audience can relate to. Not many positive comments came out for the movie but it did get few decent feedback.

Yet another chic-flick, romantic comedy-drama from Scarlett Johansson this time with Joseph Gordon-Levitt. This movie is definitely not one of those mediocre guy meets girl, falls in love and finally after long struggle either gets married or splits up. This movie showcases a major real-time problem in today’s relationships and the world. The movie shows not only the fall of love and lust but also the rise of love, that love can happen again and at its best with the right person.

The best of its kind, Chef is a rom-com that’s all about food!! Chef is a beautifully set love story that also includes the love for food, something no one can resist. It depicts the life of Jon Favreau, playing the role of a chef who quits his job and opens a food truck in Los Angeles. The movie shows the fall and rise of a chef, how his personal and professional lives are affected by the decisions he takes. Chef is not a sophisticated movie with a deceptive storyline. It is a simple and neat movie that serves its purpose well, above and beyond.

Off from her usual genres she was playing at that time, Scarlett rejoined with the Coen brothers to work on Hail Caesar!, a 2016 comedy film. This movie created a high expectation especially because of its cast. Starring George Clooney, Josh Brolin, Channing Tatum, Jonah Hills and Tilda Swinton along with Scarlett Johansson. Set in the mid-1950’s, Brolin and Clooney play the lead roles, the former a producer who tries to figure out the kidnapping of the latter, a movie star. Scarlett plays the role of a synchronized swimmer who gets pregnant only to give up the baby in foster care and later adopt the same baby without revealing herself as the birth mother. This movie is one star-studded entertainer of the year 2016!

A beautifully set family-comedy drama, In Good Company, is one of those feel-good movies that depicts the life of an advertising executive (Dennis Quaid) whose company is acquired by a larger company, but the catch is the CEO (Topher Grace) is half his age. Things get worse when the new CEO shows interest towards his 18-year-old daughter (Scarlett Johansson) and starts dating her. For the time it came out in 2004, the movie was celebrated to be one of the best of the year that shows a clear and neat screenplay with decent casting and a very good storyline.