Stream It Or Skip It: Rooting For Roona, A Documentary About A Girl With Birth Defects Facing Overwhelming Odds

Netflix is the streaming house for every genre. Horror, comedy, drama, action, mystery thriller. You name it. Netflix has it all. Netflix also has a store of very remarkable documentaries that will put you into rhetoric. One of them is Rooting for Roona. This is an extremely heart touching story of a little girl from Jirania Khola a town in Tripura, India.

Watching documentaries will momentarily put you in the characters’ shoes. Life is not the same for everyone. Some people have to work hard to get the basic needs fulfilled. We hope that after reading this Rooting for Roona review you will watch the story of the little girl.

In this Rooting for Roona review, you will realize that this is a story of hope faith, and unwavering patience. Who is this Roona? Why would the streaming giant Netflix have a documentary on a little girl in a faraway town? Keep reading this post. This is a Rooting for Roona review. All of your questions will be answered shortly.

Interesting Read : 13 Halloween Movies on Netflix That Are Spooky as Hell

Rooting for Roona is a short documentary of 41 minutes. It is a story from rural India. Tripura is a small hilly state situated in northeast India. It is surrounded by Bangladesh from its three sides. Here lived a little girl named Roona with her parents.

If the name Roona rings a bell it is probably because back in 2013, this baby had become quiet and internet sensation. Roona was born with a birth defect. The medical name of her disease is hydrocephalus. In layman’s language, this is a condition of severe cranial deformation caused by build-up fluid. Due to this fluid, the brain swells the normal size. In Roona’s case, her brain had a circumference of 37″. An average newborn baby’s head has a circumference of 14″. This condition resulted in Roona being unable to walk, talk, or sit up on her own.

A very expensive medical intervention was needed when Roona was born. However, her parents were unable to afford one. In many such cases, poor souls like Roona are disowned and abandoned. But not Abdul Rahman and Fatima Khatun. They tended to Roona despite everything. Hoping, praying, and trying hard to help their little girl get better.

Photojournalist Arindam Dey turned out to be the god sent Samaritan. One day, he visited Roona at her house. He took pictures of the poor little girl. He was determined to throw more light on the little girl so that her parents could receive some much-needed help.

This was the time when the internet was still a luxury for many people. The images of baby Roona became an internet sensation in a matter of a few days. Many noble souls from around the globe extended their hands to help the poor girl. Thanks to them, Abdul Rahman and Fatima were finally able to afford expensive treatments to help their poor girl.

They took her to Delhi where little Roona underwent multiple surgeries. This took a lot of pain, hardships, and immense patience from her parents and family. They struggled for many years. The 41 minutes documentary does its best to portray it.

Unfortunately, Roona passed away some time back in June 2017. She was about 5 years old. Her tale will make you reach out for tissues.

Why you should watch it? 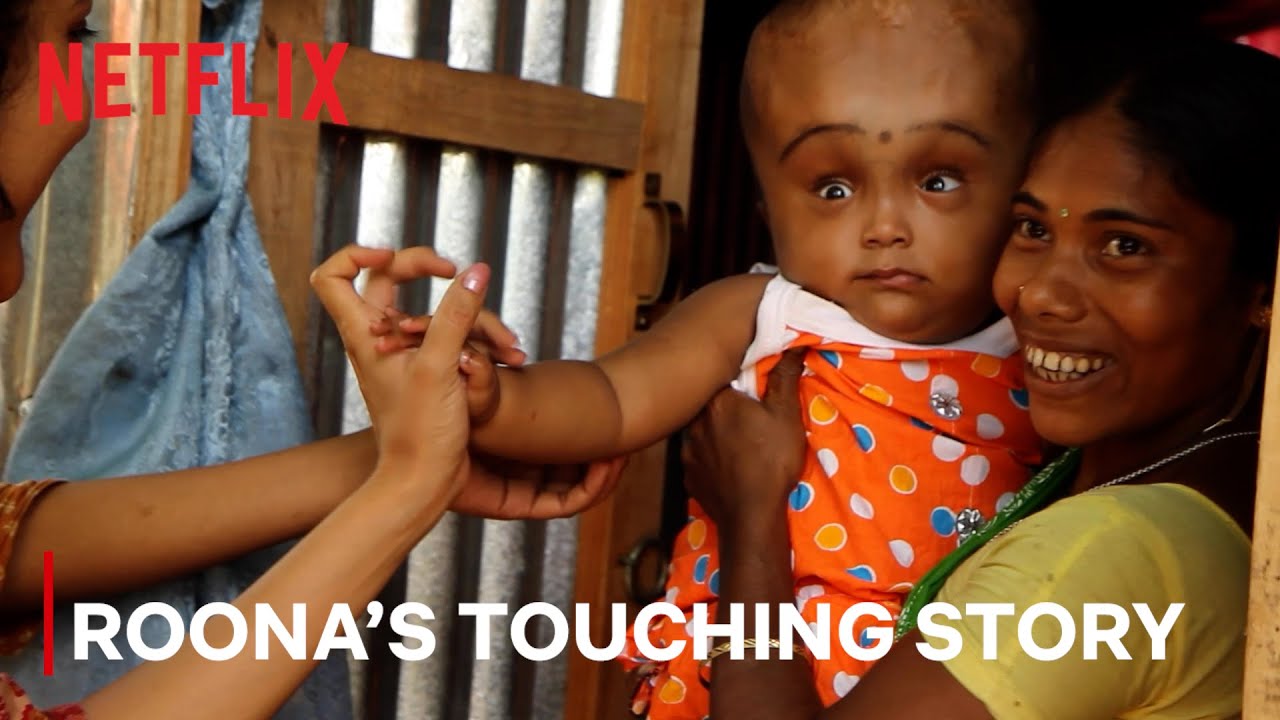 Everybody has their share of struggle in life. Some days are dark beyond our imagination. However, giving up is not an option. As you watch this movie, you will take a trip to Roona’s house. Scarce living conditions will tell you everything. While good food and water is a basic need for some, it is a luxury to many. This documentary will make all your problems seem smaller.

This is the story of humanity and how it is preserved despite all the atrocities that occur each day. The pain of one small girl from a faraway town resonated with so many hearts that they extended their hands to help the little girl stand on her legs. This documentary showcases that with will and determination you can jump over the highest hurdle.

Rooting for Roona documentary is very different from others. Firstly, because of the unique medical disorder. This documentary has enlightened a lot of people about this peculiar disease. Secondly, the documentary is a trip to rural India. Especially the north-eastern part which is quite a mystery to many mainland Indians.

In this documentary, you will see two sides to everything. There is care (taken by Roona’s parents) there is negligence (of the society). There are people who judge and criticize. There are also people who help without any conditions.

The documentary is beautifully created to show many such human sides. For example, at the very start of the documentary, Fatima Khatun says, “I’d always wished for a daughter. Always. A daughter knows her mother’s sorrow.”

One can convincingly argue that the film belongs more to Fatima than to Roona. It wouldn’t be wrong. The poor girl’s mother was under tremendous social criticisms. Unfortunately, these are the popular perspectives of Indian society in cases like Roona’s. Obviously, there are some exceptions. However, many believe that the mother should be held at fault for any problems with the baby.

The critics have found the topic and documentary extremely unique. The making is simple, clear, and concise. One can find it easy to resonate with Fatima. In these 41 minutes, one gets to witness the life of all the characters with brutal honesty. The natural tendency of filmmakers in such cases is to make things melodramatic. However, there aren’t any unwanted filters or dramatic elements to spice things up. This is another good thing about the documentary and the reason why it was praised by the viewers.

If you are someone facing medical problems yourself or within your family, this is the documentary for you. It will boost your will and ease some pain. A medical professional should also watch this documentary as it can help you to help such kids in the future. People need more information about such a disease. There should be researches in the field of medicine and technology to make the treatment affordable and effective for normal people.

Interesting Read : The Trial of the Chicago 7: A New Netflix Film to Watch Right Now

People with a weak stomach and repulsiveness towards medical visuals may find this documentary a bit gore and grotesque. This documentary is not meant for you. However, if you have the courage to deal with the truth, then you should definitely watch this film. 41 minutes is not a lot and one can easily spare some time for the poor soul.

This is all you want to know about the subject. We hope that this Rooting for Roona review and the film will have a positive impact on everyone. And tomorrow if there are more unfortunate kids like this, Roona’s story will serve as a guiding light for their parents and society to help them survive.