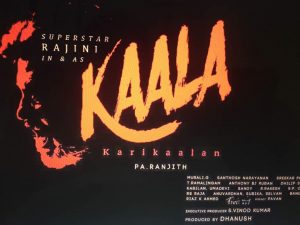 It is that blessed time of the year again where we get a glimpse of a new Rajini movie. The last time the superstar was on screen for Kabaali, the trailers had blown our minds and the box office had hit huge numbers. It’s now time to witness the success of another Rajinikanth blockbuster.

‘Kaala’ Karikaalan is going to be our Thalaivar’s 164th movie. Kaala is the first and short name given to refer the movie. Karikaalan seems to be the name Rajini holds in this film. Karikaalan is the name of a brave Tamil Chola King who built the Kallani dam in the 2nd century AD. While we aren’t sure if that is what the film is about, we are sure it is going to be a head turner. We only have to wait and watch!

It is to be produced by his son-in-law Dhanush and directed by Pa.Ranjith. The film which will see the Trio Rajini-Ranjith-Dhanush is another brainchild of Wunderbar films, music by Santhosh Narayan and in female lead roles, we have Huma Quereshi and Samuthirakani. Unlike most films, Kaala has gone ahead and announced the title before the commencement of shooting. The film is scheduled to start shooting on 28th May. We cant wait to see the first look of this movie.
It is bound to show the same results Kabaali brought in. Kaala is already spreading its charm. We sure can’t wait to see our legend Rajini in Kaala.