Holding a flag of the inspirational film, Atkan Chatkan, is the latest release on an OTT platform, ZEE5. Written and directed by Shiv Hare, marks a debut feature film for him. The movie sets the mood to convey the message of poverty prone society.

The film made under the banner of Lokaa Entertainment and presented by music composer AR Rahman. Ever since Slumdog Millionaire 2008 has come up, we need more content on this agenda. Presenting the Atkan Chatkan movie review for you. Building your imagination to believe the dirt-smudged clothes and innocent kids’ faces, the film is expected to gain much popularity than expected.

Atkan Chatkan is a story of thirteen years old boy, Guddu, a chaiwala and a gifted child who has an alcoholic father, who was a musician before, and a mother who abandoned the family. The film is set in Jhansi. Right from the first scene, we see the little poor kid working hard on a tea stall where we notice him tapping while mixing kathha in a paan and finger rings patting the brass tumbler. His hands perfectly penetrating on the whereabouts of utensils and boxes, reflects his immense love for music.

Living an enjoying life with his three street kids friends; they all are witnessed rapping at a dingy place in Jhansi with the recyclable waste like broken bottles, pipes, and broken drums.

What else do they have the option to share their music energy? Why life is so hard for kids or adults who have such a desire to build their careers in an artist field? But can’t manage to get the resources, hence the major is unrecognized, and the remaining holds a fear of witnessing their talent. The struggle is hard for them.

Resuming the music craze, and jamming once in their secret adda, Guddu and team were discovered by Tansen Sangeet Mahavidyalaya in Jhansi and hence the strife got true. Called upon by the mentor, he invites them to be a participant of the prestigious music competition held in the school. Gotten the support of a teacher with a heart of gold, they got assistance to survive this battle.

This sums up the first half of the film. The remaining is predictable now. The journey of the kids to turn their life into musicians becomes the real fight of their life.

Interesting Read : The Devil All The Time Review: Bad vs Evil

A storyline often suspected and is stated “for how long the artist from music, art, dance is expected to be from the royal end family and not from the slum or below the class. “The agenda is clear, and hence the film is an inspiring one to conquer. With soothing and melodious music, it is so healing in the mind that can’t be avoided.

A youthful one twenty six-minute-long film. 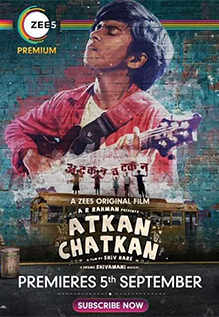 is phrased in Hindi is in provocative and a happy film. The setting and information of this era while establishing the mentality of the eighties don’t match at a time in the film. The cast is a delight for eyes as to how beautifully he sums the scene with dialogues and expression is tremendous. The leading cast, Lydian Nadhaswaram, Guddu, is a professional pianist and does his role outstandingly. Along with him, the film also features Amitriyaan, Sachin Chaudhary, Tamanna Dipak, Yash Rane, and Ayesha Vindhara in the lead roles.

The film is produced by Vishakha Singh and AR Rahman, music by Sivamani, cinematography by Subhransu Das and edited by Lionel Fernandes.

Where to watch – ZEE5