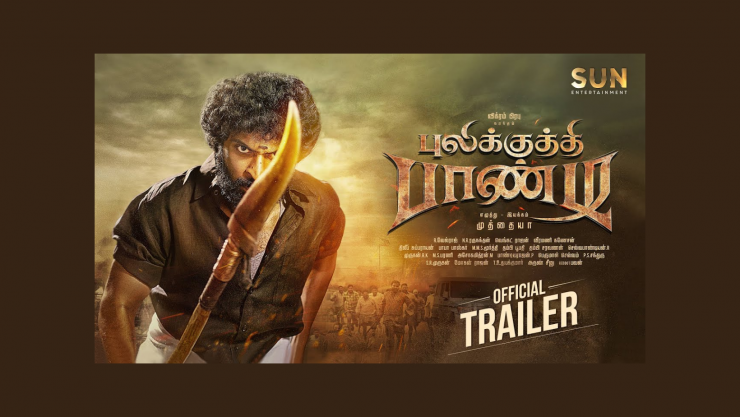 Plot Summary of Pulikkuthi Pandi: A young, aggressive lad (Pandi) is an orphan from a village in Tamil Nadu. He has a heart of gold but is a ruffian with cases of a few petty crimes registered under his name. One day, his path crosses a woman (Pechi) independent and strong-willed, and he falls head over heels for her.

He decides to mend his ways to lead a family man’s life and vows never to take up violence again. However, fate had its plans for him, as a ruthless antagonist, and his sons are shown to misbehave with his lady love and her father, which sucks him back to the circle of violence.

How Pandi steps in to resolve things and locks horns with the aggressive father- sons duo, forms the basis for the rest of the story.

A film made by Muthaiah, you know what to expect, right? If you have watched movies like ‘Komban’, ‘Kutti Puli’ or ‘Marudhu’, you will understand that most of his works carry the same template: a mix of generic comedy, romance, and action.

However, one cannot deny that however mainstream his films are, he has a flair for constructing the plot points. Let’s take Pulikkuthi Pandi as an example. A sequence shows how the female protagonist’s (Pechi’s) father is connected to the male protagonist (Pandi) and his family, through a flashback, that is a nice plot point.

These plots sound good when narrated to someone, but the fact remains that everything in his films remains at the narrative level, and there is no attempt to enhance it into a screenplay. Do you know what makes this worse? The television serial vibes that his movie gives that leaves the audience with utter dismay.

But there is more to Pullikuthi Pandi than a lackadaisical first half.

Pulikkuthi Pandi is written and directed by M. Muthaiah, typically like any other Muthaiah film, a crude mix of romance and action. Muthaiah is known to be an expert in delivering village dramas with an exciting plot point. The film marks the return of Lakshmi Menon to Tamil Cinema after four years.

Unlike a Muthaiah film that carries the same cachet, we expected the film to have been named after the leading female protagonist. But Alas!

The film begins with the cliched introduction of the male protagonist in a stereotypical setup, as a young ruffian named Pandi from a village in Tamil Nadu, who falls in love with a woman and decides to give up on violence unless the antagonists enter and he vows revenge against them to bring justice to his lady love and her family.

Yes, you are thinking, right! Every Muthaiah film carries the same cachet. Everything seems to be stereotypical from the hero and heroine’s introduction to the comedy to the screenwriting. You will be seen yawning through the first two-thirds of the film and might think of it to be a bad film. You read it right! But you got to wait!

The climactic twist that saves the sinking boat:

Pulikkuthi Pandi brings in the real twist amidst the crucial point of the plot, (Ah! That is what Muthaiah is known for, his brilliant plot points, this time with a surprise though.) that will maybe require you to reconsider the thought of this film actually being a bad one.

The film picks up its pace in terms of twists, action sequences, and in general its screenplay, in the last half of the film, so much so that you definitely do not expect this in a commercial rural flick. Let us say that the climactic twist saves the film from slipping into a completely bad film and saves the boat.

The heart of Pulikkuthi Pandi is the amazing plot points with a shocking climax reveal; it is what makes us look past the stereo typicality of two –thirds of the film. To add to this what leaves us with a fondness for the film is the fiery performance of, Lakshmi Menon and the amazing portrayal of an aggressive young lad by, Vikram Prabhu.

This film also highlights the fact that a movie does not have to orbit around a big star to attract the audience, a brilliant plot twist with convincing performances does the job well.

Talking of the cast, we cannot fail to mention the cameo of Samuthirakani. He convincingly plays the role of the male protagonist’s (Pandi’s) father, who raises his against violence and police injustice and is selfless to the point of irking his own family. Like all the good things, he too has an untimely end.

His steely presence in the film seems to add to the runtime, but it definitely is an interesting addition to the Muthaiah Cinematic Universe.

There is downright stereotypical humour in most of M. Muthaiah’s films. In Pulikkuthi Pandi too, Singampuli, Dheena, and Bala seem to follow a similar line; however, the changeover towards the end makes up for the inept humour. Pulikkuthi Pandi’s movie review by critics states that the film remains stereotypical with its screenplay and sequences for almost three quarters. However, the last hour of the film is what keeps the audience glued to their seats.

The monotonous ‘revenge-seeking plot’ in the film is coupled with an engaging twist that surprises the audience. The fact that you have stopped looking at your phone for about an hour in a Muthaiah film is in itself a huge achievement.

Most movies go by the same monotonous sequence: song, action, comedy, and repeat. However, the fact it is a television premiere calibrates your expectations. Otherwise imagine travelling to the cinema hall to hear the song’s lyrics that go like ‘Pulivesham Katti Aaduvom, Pulipaalil Tea ah Poduvom.’

The way the female protagonist, Pechi’s, a character is written, one can not call it just a coincidence that the name goes by a goddess or a deity. In essence, the character subtly points out, a goddess taking matters into her own hands, to triumph over the evil.

Her aversion to violence that culminates in a totally unexpected plot twist is something that surely elevates an otherwise badly written film. The storyline panned out in the movie is unlike seen anywhere else, given our hero-centric culture. The climax comes as a sweet surprise, especially after the film’s chosen title.

The entry of a new player in the two-pronged race:-

Pulikkuthi Pandi was made during the latter half of 2020 and is marked as the second Tamil film that was shot during the pandemic and released directly on television. The film got a brilliant reception across various social media platforms that showed that the entertainment consumption post-pandemic is not just a two-pronged race, being the OTT platform and the traditional cinema halls.

The release of this film directly on television marked the entry of yet another player the direct-to-television releases. The film is based on a typical Muthaiah template of family dramas, that gives the perfect television show vibes, maybe the idealogy of M. Muthaiah is slowly evolving, and it will not come as a shock if we are to see him as a master of reviving the theatre-going habit of people. 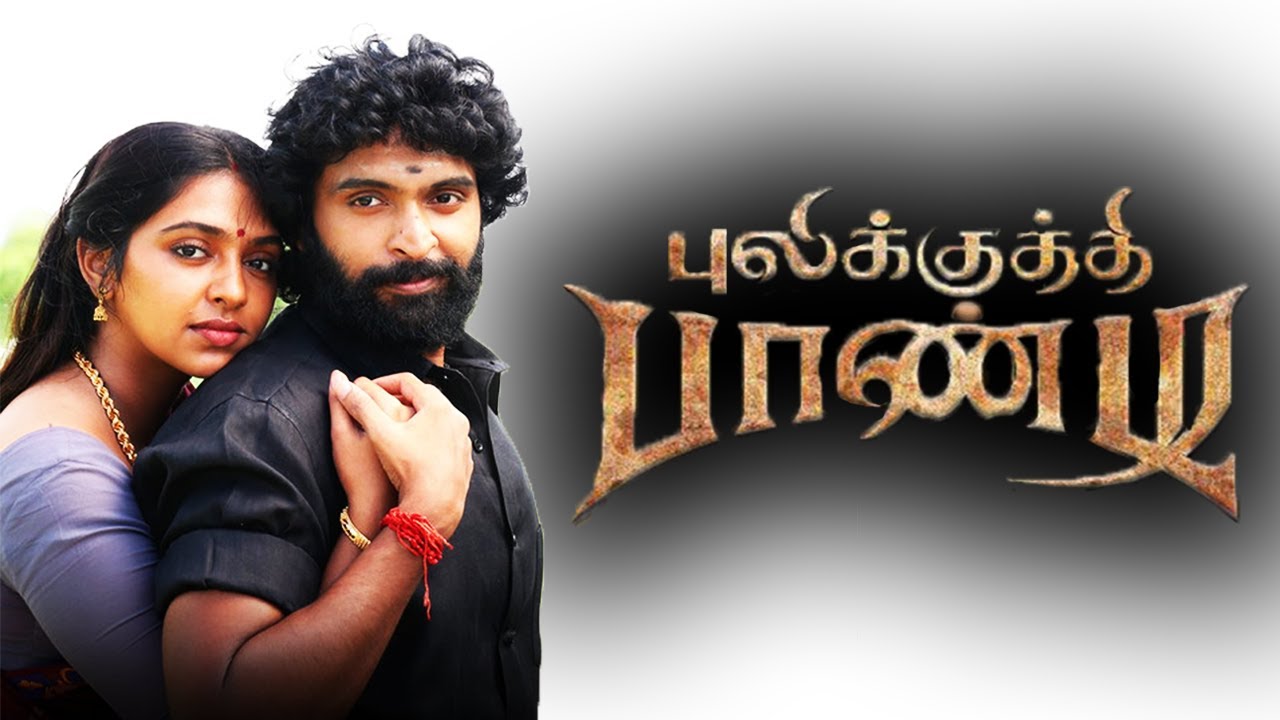 Vikram Prabhu and Lakshmi Menon starrer Pulikkuthi Pandi that released earlier this month were slated to release on Christmas eve. However, due to the delay in the post-production, the filmmakers decided to slate its release on 15th January 2021, coinciding with Pongal and the male lead’s birthday, Vikram Prabhu.

The film was shot amidst the pandemic in the latter half of 2020 and was produced by Sun TV Network on a limited budget.

The filmmakers insisted on a theatrical release, but due to some inadvertent delays in the post-production, the film was slated as a direct-to-television release via Sun NXT. The film would then be available for streaming via the digital platform Sun NXT.

The film garnered a whooping viewership of 13.284 million impressions and a rating of 17.05 TVR, thus making it the most-watched Tamil television program of that week.

The film received a mixed response from the audience and the critics. From the trailer, the audience is bound to think of the movie to be a rehash of earlier outings of the director M. Muthaiah. However, the crucial plot twist, the consistent character motivations, and an oddly compelling second half is something that proves that “Never judge a book by its cover.”

In its entirety Pulikkuthi Pandi is a movie that has a great narration, that is, it works well only on paper, the screenplay, that is the execution of it, seems to be very ordinary. But it is the interesting plot twist, and the juncture at which it is timed and executed is that saves the film from slipping into a badly written film.