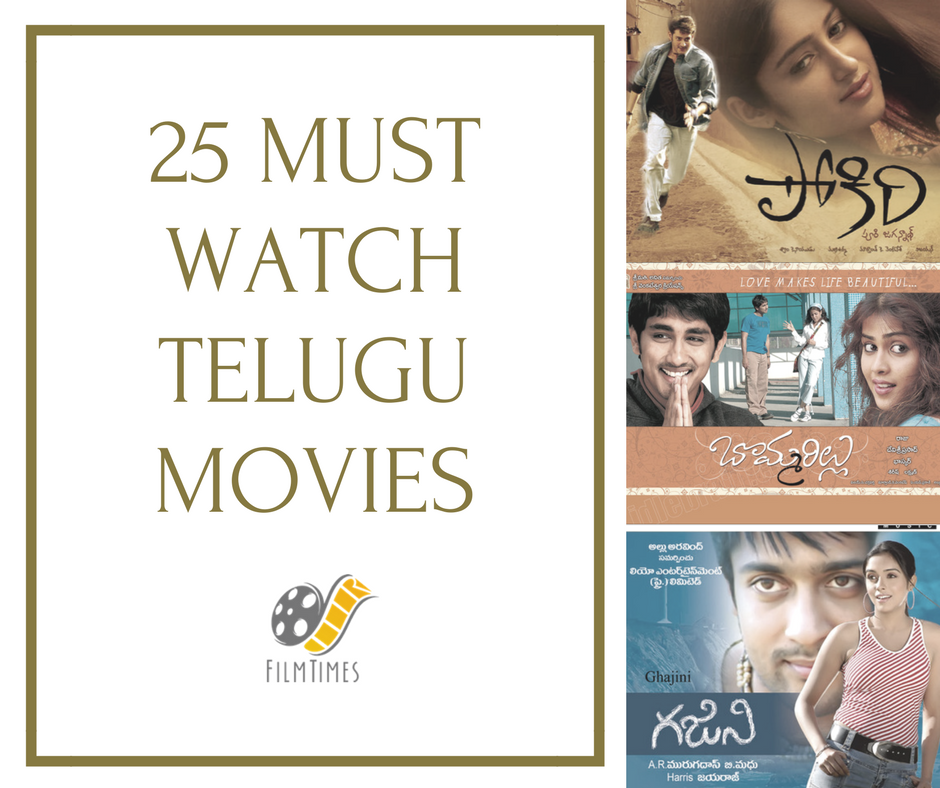 25 Must Watch Telugu Movies Of All Time

Tollywood has proved itself as one of the most significant film industries in India. There are a lot of classic films in Tollywood which are worth watching more than once. We compiled a list of top 25 must watch telugu movies of all time.

To feel the magic of this movie, you need to really watch it. If you want to give a try to a classic, this is the one you need to go for. Great performances by Savitri, NTR, and AMR are the highlights of this work of art. Awesome tracks make you nostalgic and take you to the yesteryears.

All time classic blockbuster. The cinematography of this work is one of the most talked about in the history of Telugu cinema. Missing this movie is equivalent to
missing something incredible in life.

One of the great works by K. Viswanath. The performances by Dr. Kamal and Jayaprada keeps the audience spellbound.

A Top class thriller of its times, starring Bhanupriya and great background score by the maestro Illayaraja.

Filmmaker Jandhyala is known for his comic work and has created magic in this classic super hit. With a great cast of Chiranjeevi and Suhasini, this comedy is a must-watch.

Highly appreciable work of Singeetam. This classic of the late 80s was the first attempt of making a silent movie in modern day cinema. It was watched across the country and Kamal Hasan’s new look and challenging performance are commendable.

K. Viswanath has delivered memorable classics which have no match. This is another such work by him.

Now if Maniratnam is joined by Illayaraja, there has to be some magic created. Geetanjali is one of those works.

One of the greats by veteran actor Balakrishna. This is the only sci-fi Telugu movie of the time. Singeetam Srinivasarao gave a path-breaking concept to Telugu movie for future generations to follow and learn.

Great comedy, one of the best by Rajendra Prasad. Won’t get boring even after watching numerous times.

Great movie created by two greats of Tollywood, Sridevi and RGV. One of the most memorable Telugu movies.

Jandhyala strikes back again with rib-tickling comedy. With Rajendra Prasad and Rambha in the lead, fun-times are back again.

Beautiful mythological classic and top-class performance by Nagarjuna, took the industry by a wave of rethinking about the concepts of the ever-changing cinema world.

Power star, Pawan Kalyan and Bhoomika made this story-telling graceful and entertaining for all kind of audience.

With Trivikram having Shriya playing the lead role, Sunil and M. S.Narayana’s awesome comedy scenes, this movie is watchable even today.

This is another re-watchable movie which would never get you bored.

With one of the great star cast in the likes of Prakash Raj, Venkatesh, Suhasini and beautiful Arti Agarwal, this one is a complete entertainer. Trivikram’s dialogue writing talent at its best.

An unexpected super hit by Mahesh Babu playing the lead role. This one got so popular that it was re-made again and again in different regional languages, and found success with all its re-makes.

This kind of movie can be only done by Chiranjeevi alone.

A very few have been made with this theme and this kind of screenplay. Chandrasekhar Yeleti is the master screenplay writer who has made the biggest impact in this movie. It’s a suspense thriller with one of the career-best performances given by Charmi.

Mahesh Babu, Trisha, and Brahmi dazzle the screen with this recent Trivikram’s creation. A massive hit with a shocker climax.

This is one of the best in the recent times by Shekhar Kammula. Cinematographically a milestone in Telugu cinema.

The Greatest spice of the Telugu film industry ever. With Mahesh Babu as ‘Pokkiri’, this work inspired filmmakers across South and Bollywood to re-make it, multiplying the super hit effect everywhere.

A mythological and musical piece. Nagarjuna teamed up with Raghavendra Rao to create this epic tale.