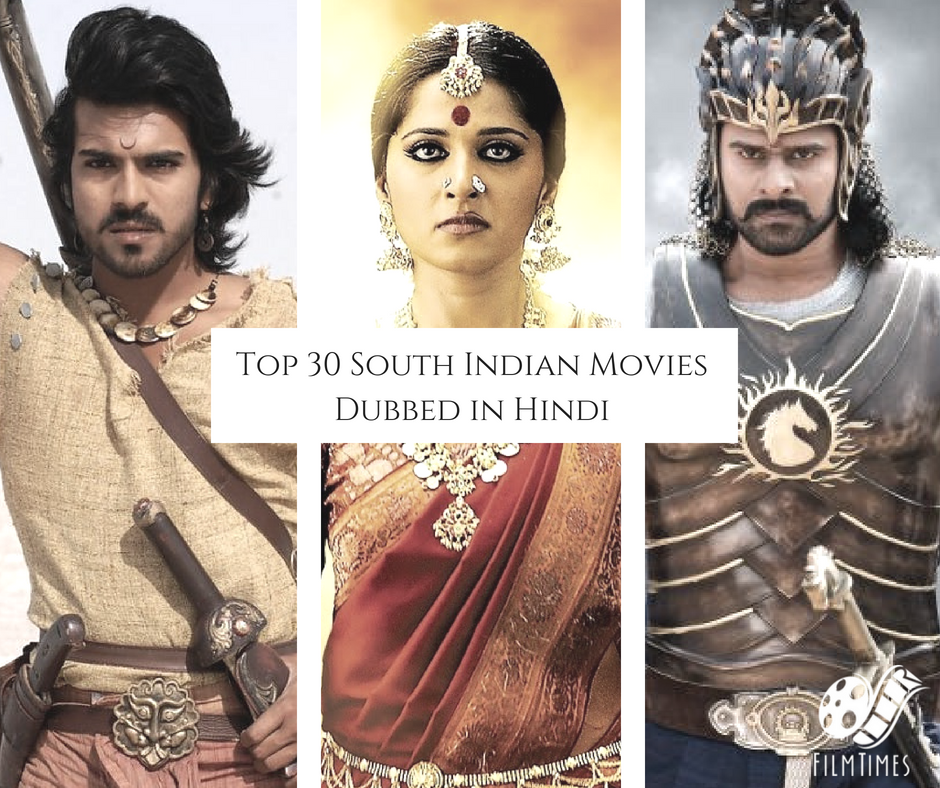 South Indian movies have made its presence felt, by competing and beating Bollywood revenues in the past few years. These movies are not only grossing money in their dubbed versions across India, outside the country also they are making a lot of noise.

The best example is that of Baahubali 2 which entered the 500 crore club, where no other regional movie or Bollywood has ventured before. Even the Khan’s of Bollywood could not attain this mark.

Although South Indian movies come up with a lot of new ideas and scripts and keep their fans loyal, there are some fixed plots which are more popular with the viewers of dubbed movies on TV. So most of them are love stories with a lot of Masala. Mostly the plots would be around a couple who are in love, however, face challenges due to their family feud or hindrance by a local goon supported by a powerful politician.

The reason these known plots are accepted with enthusiasm is the presentation is different from that of Bollywood.

There are dozens of movie channels who air south dubbed movies everyday. There are particular actors whose dubbed movies are loved by the Hindi-speaking audience. Some of these actors are:

These are some of the most popular and highest paid actors of the south Indian movies. Let’s have a look at the list of their most popular dubbed projects. This list would help you to choose a dubbed movie, when you are making up your mind to watch one.

This is the biggest blockbuster series of South and the most successful project of S.S. Rajamouli. Starring Prabhas, Anushka Shetty, and Tamannaah in the lead roles, it’s a must watch.

It’s the prequel of the first movie though it came after the first part. This one broke all records of collections in the country and made its mark in many international locations too.

This is a partly historical movie with the horror factor abundant. It’s about how a young woman fights an evil spirit as her grandmother did decades ago. Anushka Shetty plays the lead role, and her talent was well explored in this film and was completely appreciated by all fans and critics.

This thriller by Rajinikanth became so popular that it got remade many times in different regional languages. This movie was remade in Hindi too and was titled Bhool Bhulaiya with Akshay Kumar playing the part which was played by our own Rajini Sir.

Another super hit movie by Rajinikanth, where he plays an NRI software engineer who comes back to India to set things right. This is a must watch due to its quirky screenplay and Rajini Sir’s acting. The dubbed version is called Sivaji The Boss.

Rajinikanth plays two roles in this movie, one of the scientist Vaseegaran and his creation, the robot Chitti. The dubbed version is called Robot. This is a mega blockbuster and soon there would be a sequel to this movie.

This is a reincarnation movie starring Ram Charan Tej. It was a Telugu mega-hit and is aired in Hindi too, which is popular with the viewers.

This romantic-action-comedy superhit by Allu Arjun not only made waves in the South, it also established Allu Arjun as one of the favorites among the Hindi audience. Its track Amalapura is a hit among the North audience.

Protagonist played by NTR Junior makes this movie completely entertaining and engaging. It is one of the highest grossers of the Telugu industry.

Chiranjeevi plays a goon, who later has a change of heart and fights for the good. He is a star who has never lost his fan following both in the South and in the North. People all over the country know him for decades for his intense acting skills.

Charming Mahesh Babu travels to Mumbai to take on the underworld by his stride. This is a great work by him and one of his latest.

Prabhas came into the limelight in the dubbed version through this movie, long before he could sign Baahubali. This movie has everything in the name of entertainment.

Another hit by NTR Junior, where he falls in love with a girl and she responds with affection without realizing that he has a hidden agenda.

Antagonist played by Sudeep of Kannada industry, there is a housefly who is seeking revenge from him. It is the reincarnation of a guy who was murdered by Sudeep. It is dubbed as “Makkhi” in Hindi.

An underworld don who is living abroad is controlling a lot of activities in India. This movie is called “Rowdy Baadshah” in Hindi.

This is a triangular love drama where Prabhas is playing the lead, who is to choose between Tapsee Pannu and Kajal Aggarwal as his life partner.

Bunny is a carefree Pizza shop worker, he witnesses a robbery and due to his witness, the prime suspect Bittu gets arrested. The movie goes about depicting the romantic life of Bunny and on the other hand Bittu planning his revenge on him. This one is called “Dangerous Khiladi” in Hindi.

Typical south Masala movie by NTR Junior where a strongman is forcing his daughter into a marriage and the lead actor NTR comes in for her rescue. This movie is known as “Super Khiladi” in the dubbed version.

A millionaire who is impressed by the carefree attitude of another guy, and wants to learn to live like him. It’s a superhit Telugu comedy-drama dubbed in Hindi. In Hindi, it is called “Businessman 3”.

A respectable politician slips into coma. In the meanwhile, his son grows up to be a super cop. When he gets out of coma, his son recreates the old world around him so that he does not slip back into coma again.

A great kind betrayed and driven away by his close friend. The king’s son grows up to be a great warrior and reclaims his father’s throne.

A pious and simple lawyer in the daytime turns vigilante in the night and punishes corrupt people according to the old Hindu books. It was dubbed in Hindi as Aparichit.

The thrilling story of two gangsters and a vigilante who threatens to kill one of them in a given time of thirty days. There is a love triangle too, which makes it more interesting. The Hindi version is called “Meri Jung – One-man army.”

The lead character is a rock music star. He is suffering from a psychological disorder and wants to avenge his parent’s murder. In Hindi, this movie is dubbed as “Ek Ka Dum.”

This is a great plot, where a politician plans his own attempt to an assassination, however, it turns into a real one and he is killed. The hired gunman is double-crossed by another gunman. There is a death in the cross firing also. Now it’s the job of the hired gunman to prove himself innocent and find the guilty. In Hindi is dubbed as “Cheetah, the power of one.”

People from five different walks of life huddle together when they come under a terrorist threat.