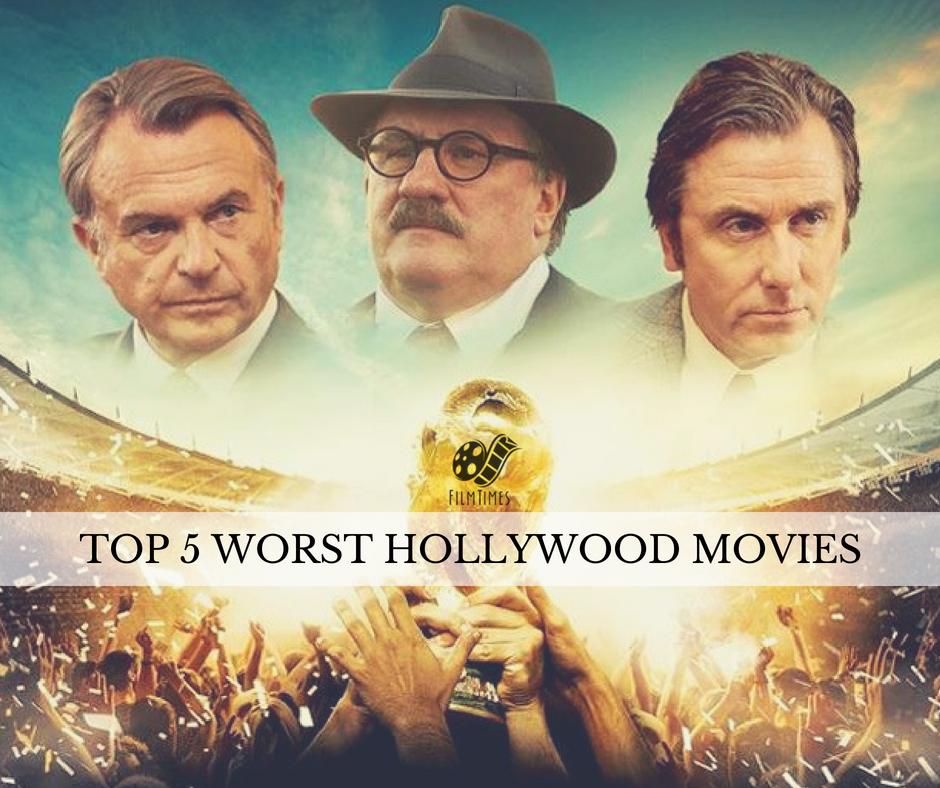 With good comes bad, don’t you agree? Well, how much do we enjoy watching some good classic movies, comedy movies, romantic movies and much more? If you are a movie buff, I’m sure that you would love to have a 2-hour treat! But imagine if enter a movie hall and sit through the entire movie only to walk out of the hall with a headache! Yes, bad movies are the worst thing that can happen to a true movie lover. But hey, unless we don’t watch a bad movie, you think we can truly appreciate good cinema?

Anyway having said that, who am I to say a movie is bad or good? I don’t have that power! So after a lot of research, these made it to the top 15 worst Hollywood movies. So in no particular order here are the top 5 worst Hollywood movies that you could either watch at your own risk, or if you have too much time in the world, or if you really want to see how can a movie be this bad.

About the movie: A rogue DIA agent and an FBI agent were tasked to destroy each other but they soon discover that they had a bigger enemy at their work. Wondering how this could turn out to be such a boring movie? Well, it was a damn clumsy movie with a lot of overblown action, with no originality or wit or style. I’m sure even the makers were wondering why they made this movie. This is one of the movies that made the zero percent rating list on Rotten Tomatoes.

About the movie: Baby talking movies – Why? We thought after the Baby Geniuses, directors will stop making baby talking movies. But no! There comes the second part. Are they the new generation of superheroes – like really? Why would you want to make a movie where a bunch of toddlers is in a mogul’s experiment to crack the code of the baby talk of this evil doer who intends to control the mind. These bunches of smart-talking toddlers have to race against the time because there are babies everywhere. It was very very creepy to just see that.

About the movie: This movie is about the Federation International Football Association (FIFA). 90% of the production budget came directly from FIFA due to the stars of the movie. Having said that, I don’t think I should further talk about this movie and should bring to notice what Tim Appelo has to say which was a perfect review in one line. The Wrap’s Tim Appelo says it’s “One of those rare films so unfathomably ghastly you could write a better one while sitting through its interminable 110 minutes.”

Alone in the Dark

About the movie: You might think this is just another horror movie but this is a detective story. The detective is intrigued and slowly unfolds the events of the paranormal activities with deadly results. Could the movie have been good listening to the plot right? But not all movies do well if they have a good plot. You should know that Tara Reid, a curator of natural history museum co-stars as the love interest of Slater and the director was has a history of his temperament.

About the movie: Once you are starring in the most popular television show “Friends”, you are on both ends of the sword. The audience already loves you but at the same time, they expect you to do better than your present show no matter what. After two seasons of friends, Matt LeBlanc, famously known as, Joey Tribbiani, decided to sign a movie that not just attracts the audience of friends but also the family crowd. He signed on “Ed”.

Ed is a story of a chimpanzee that is well trained and plays third base in the baseball team for a minor-league. Matt apparently learns tricks and lessons from the chimpanzee. The chimpanzee doesn’t even look real in a lot of scenes which the makers could have worked on but no! We, humans, love to blame the humans don’t we, and this Matt was blamed. This is what Stephen Holden, the one writing for The New York Times has to say, “Mr. LeBlanc … is so blank that the only impression he makes is of having teeth that are very large and unnaturally white.”

So how many of the above movies have you already watched? For a change, I’m not going to tell you to watch these, but I would suggest you skip these movies because these sure are the worst Hollywood movies. So save your previous 2 hours per movie and do something more productive or rather binge watch on some movies worth watching.