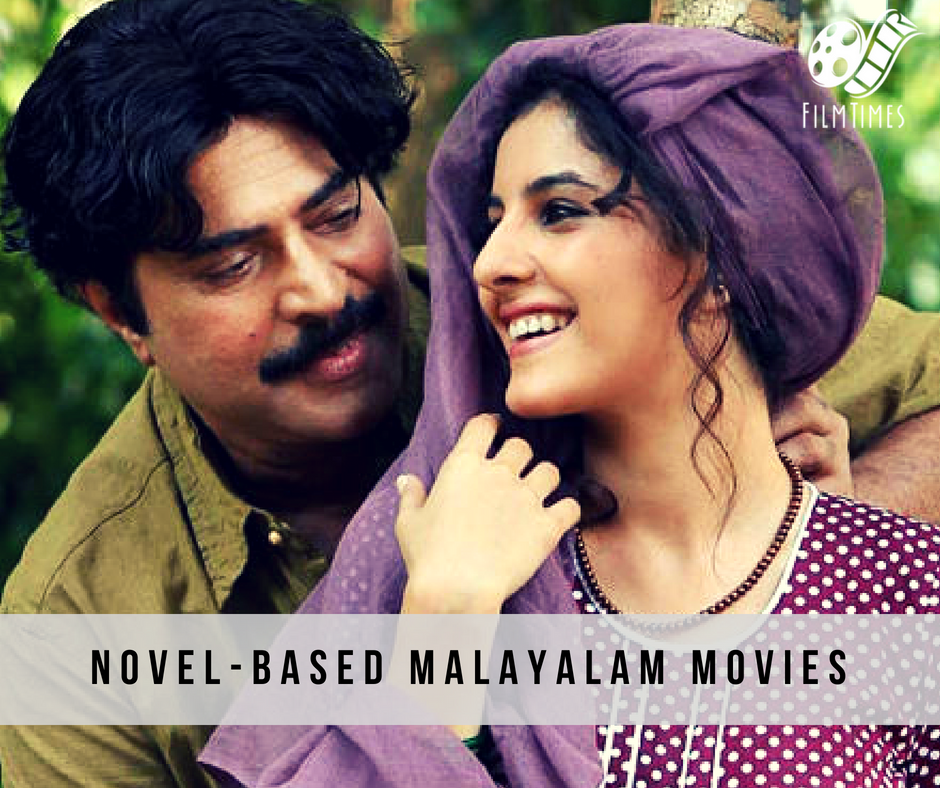 Which are the Books made into Malayalam Film?

Are you someone who waited to watch movies like ‘Gone Girl’, ‘Twilight’ or the widely adored ‘Harry Potter’ till you finished reading the book? If you believe that there is nothing like novel-adapted-films in M-town or Mollywood, you might wanna give it another thought.

Stories, tales, novels or literature, in general, holds a very vital part in making movies, the form of art we appreciate today. The subtleties, probabilities and the notion of fictional reach have been majorly acquired from books. Post the intrusion of TV and gizmos, books are highly pondered as traces of a remaining past. There are few filmmakers who are so passionate about the work that they go back and carry out the charm of a point where the literature is painted on the enormous canvas named cinema.

We must not forget that adapting books to movies is the key to reach the mass when books would have been confined to the domain of readers.

Prepared below is a list of 20 appreciated Malayalam films that are adapted from renowned novels.

A romantic tale of Karuthamma and Pareekkutty. You must have watched it more than once, although never decided to read the novel, correct? It is acclimated to the novel ‘Chemmeen’ authored by Thakazhi Sivasankara Pillai. If you wish to plunge in the seaside living and taboos? Give a try to this book and after finishing the book, do watch this wonderful compliance! The story pursues Karutthamma, the descendant of a Hindu fisher, falls deeply in love with a fish trader who is a Muslim. But, social biases try to ravage their love life and attract the fury of their societies.

Mammootty starring this release of 2014, Balyakalasakhi granted flanks to our insights of Suhra and Majid. Most of us must have read Balyakalasakhi of the famous Vaikom Muhammad Basheer. The renowned personas could very well bring back the old thoughts in the movie.

The narrative spins round childhood lovers Majeed (Mammootty) and Suhra (Isha Talwar). Born in a well-off family, Majeed falls for his not-so-rich next-door-neighbor Suhra. Post her father’s demise, while Suhra grapples to make bring both the ends together, Majeed begs his dad to fund her studies. Denied, he rambles off to far-flung lands.

Mathilukal is another great paperback by Vaikom Muhammad Basheer and it was then turned in a film having Mammootty as the lead. K.P.A.C. Lalitha provided sound to the obscure female lead, Narayani. The story pursues an incarcerated man who falls for a female hostage without even viewing her, in reality, thanks to a huge wall that divides them. Padmarajan has been and will always remain a motivation for filmmakers of Kerala. It caught five Kerala State Film Awards for the Best Film, Best Director, Best Actor, Best Screenplay and an exceptional remark.

Thanmatra made by Blessy is established on Padmarajan’s story ‘Orma’. The narrative represents the world of an Alzheimer’s sufferer including his family. Most of us must have been blown with the film, however, the paperback too holds the same charm. Thanmatra is an intellectual, insightful and unusual movie. It is a moving, thought-provoking piece for refined viewers.

Drafted and directed by Shalini Usha Nair, ‘Akam’ is a petrifying narrative of a man who begins speculating that his lady is a demon. The movie is renowned for its portrayal of passion and agony passing within the lead’s subconscious. ‘Akam’ was a conversion of a famous Malayalam novelist Malayattoor Ramakrishnan’s thriller named ‘Yakshi’. The paperback had been acclimated into a movie in 1968, which gave us one more must watch.

Mammootty impersonated triple characters in this film. When several artists make a jumble out of a single role, Mammootty managed to pull off an extraordinary achievement as Ahammad Haji, Haridas Ahmed, and Khalid Ahmed. He got his fifth Kerala State Award for the Best Actor for his show. The movie’s spine was a very famous book of the very title signed by TP Rajeevan. Director Ranjith visualized the film utilizing conventional kinds of fantasy filmmaking and a grasp of documentary technique. The movie doesn’t require even a cent of reliability.

If you are deeply in love with someone and wish to show what your heart speaks to your beloved, then this movie or a book would work as a great starting point. Not only this film alone, however, most of P Padmarajan’s creation has been invigorating. Padmarajan created this film by conforming his very own book named ‘Namukku Gramangalil Chennu Raaparkkam’. Regarded to be one of the masterpieces of Malayalam movies, this Mohanlal starring is remarked for its excellent music by Johnson and the flawless Thilakan who was just made for the character of a cruel step-father.

Padmarajan’s another gem is Thoovanathumbikal was initially a flop when it was released. It is considered as the best film ever to be directed in Malayalam now. The elaborateness of a person’s brain may possibly wouldn’t have appeared as quite filmy at that point of time. This gem was adapted from a popular novel named Udakappola. The charm of owning a man who imagined the tale acclimating it into a film is apparent completely during the film.

Profoundly inspired by leftist philosophy, ‘Anubhavangal Palichakal’ is regarding Chellappan, a socialist, a trade association chief. The movie is adapted from the paperback by the very title signed by Thakazhi Shivasankara Pillai. The screenplay, however, was inscribed by Kerala People’s Arts Club (KPAC) stalwart, Thoppil Bhasi. The movie draws out a practical portrayal of lower-class living, which is often regular conflicts amid hunger and work.

Defined as the foremost Malayalam audible movie. The tale highlights the travails of two orphaned kids, Balan, and his naive sibling, suppressed and abused by a wicked stepmother till they are retained by a benevolent lawyer. The sinister stepmother catches over the possessions of her timid spouse.

The movie is produced facing the backdrop of a circus business. Chandran who performs at a circus. Thankam, a gorgeous girl who is 17 years old, is his boyhood beloved. However, Thankam’s mom Kalyani Amma refuses her to continue her relationship with Chandran. She wishes Thankam to get married to Gopi, a popular tyrant of the city. Thankam’s dad Paithal Nair though denies this offer. However, the circus transfers to a different hamlet and things go completely out of control. The show people owed funds to Paithal Nair which they are not able to repay. Notwithstanding the circus manager’s convictions, Kalyani Amma and Nair choose to carry the circus creatures captive till the circus manager returns his money. Taking care of these animals shortly turns into a nightmare and the family realizes they have opened the doors to difficulties and troubles. It exactly implies intercept a leopard with the tail. Paithal Nair is in a fiscal strain and holds no other alternative than to assent the wedding proposition of Gopi for his girl.

A forbidden girl is discovered lifeless with her misbegotten baby, the kid is fostered by a carrier, a distinguished Hindu. No one is aware of the actual identification of the actual father of the kid, till the child’s actual father, further an upper caste Hindu concedes fatherhood. As the tale unwinds, the actual father grows stirred by sin and distress and then eventually suspects his former acts. The movie concludes with the Master’s own purposes and true recognition of his own kid and oneself.

Aadhiya Kiranangal is a 1964 released Malayalam movie, delivered and presented by P. Bhaskaran. The film consists of actors like Sathyan, Madhu, Ambika and K. R. Vijaya in protagonist characters. The movie possessed musical composition by K. Raghavan. The movie was adapted from the novel signed by K. E. Mathai.

An ambitious and gifted fictionist, Madhu comes to visit a deserted estate called Bhargavi Nilayam. The author and his helper Cheriya Pareekkanni, Adoor Bhasi undergo the appearance of a peculiar existence here. They get to comprehend from the locals that it is a possessed home.

A miserable man residing in Kerela obeys his heart and feels to protect a kid from the trough, grows her with affection, and later in life inevitably she grows spoiled and domineering. But, teachings of mundane life are certainly read collectively.

Murappennu is a release of the year 1965, delivered by A. Vincent and presented by Shobhana Parameswaran Nair. The movie stars Prem Nazir, Madhu, Jyothilakshmi, Sharada and Adoor Bhasi in protagonist characters. The movie possessed music composition by B. A. Chidambaranath.

Malayalam release of the year 1969. The story pursues two liberation warriors, Mammootty and Ravi, who gave in everything they owned to achieve India’s freedom.