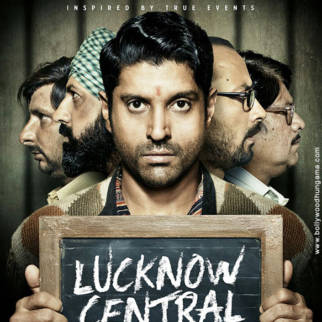 Lucknow Central Story Inspiration: Director Ranjit Tiwari was inspired by an article he read a few years back about a Band that prevailed in Lucknow Central Jail. He researched further and was drawn to make a movie based on this real-life story of this band named Healing Hearts that was formed back in 2007 that had 12 inmates who have been sentenced to life imprisonment. The band became really popular and they used to perform at weddings and parties and came back to their cells post their performance. The same story has drawn the two directors to make it into a movie; as there was a movie called Qaidi Band that had a similar plot which was released this year that didn’t catch as much attention as this one.

Lucknow Central Story: Kishan Girhotra (Farhan Akhtar) plays the lead in this movie. He comes from a small town but with big dreams of having his own band and being popular amongst people through his band. But does this dream come true? Kishan is falsely accused, for the murder of an IAS officer and is sentenced to life. Is there a room for a life in jail? Does his dream come true? Does the story only unfold the real-life story of the Healing Hearts band or does the director bring in the twists and turns and the Bollywood flavour to it? Let’s find out.

Lucknow Central Review: Farhan Akhtar’s dreams are shattered once he is thrown into the jail for life for a crime he did not commit. However, he finds fellow inmates and becomes friends with them. The first half of movie revolves around the hustle bustle that Farhan and his inmates’ faces in the jail and the entire setup for the movie takes rather long. The audience obviously would become a little restless as the band wasn’t even formed until a few moments before the interval where the talented actor Ravi Kishan plays the Chief Minister of the State and makes his entry with the announcement of Lucknow Central Jail being the host of the inter-jail band competition. And once the band is formed, the inmates are all about forming a plan to escape through their band.

The first time Director, Ranjit Tiwari catches on a good script and does deliver a few moving scenes in the movie. But he also doesn’t stick to the original story and brings in the Bollywood flavour by adding romance, fighting the villains and a prison break.

With the stellar star cast, my expectations of this movie were rather high. I could easily say this is not one of Farhan’s best performances as he was still seen as Farhan Akhtar rather than Kishan Girhotra in a lot of scenes mainly because of the inconsistent accent. For a prisoner, he was shown to be rather happy and also did not show even a bruise the whole time. Ronit Roy is another brilliant actor who plays the villain but his character ceases to be effective after a point in the movie. Diana Penty is seen as an NGO worker where she wants to reform these prisoners through this band. Deepak Dobriyal and Rajesh Sharma did complete justice to their role and were able to keep their audiences together.

This movie has no surprise element and is rather predictable. However, the story unfolds rather slowly and doesn’t hold the audience till the very end. Though this movie is revolving around a band, the music also was not as appealing as it could have been except for Rangdaari and Kava Kava. I would push myself and rate this movie with 2.5 Stars and would suggest you not to use logic when you watch Lucknow Central.