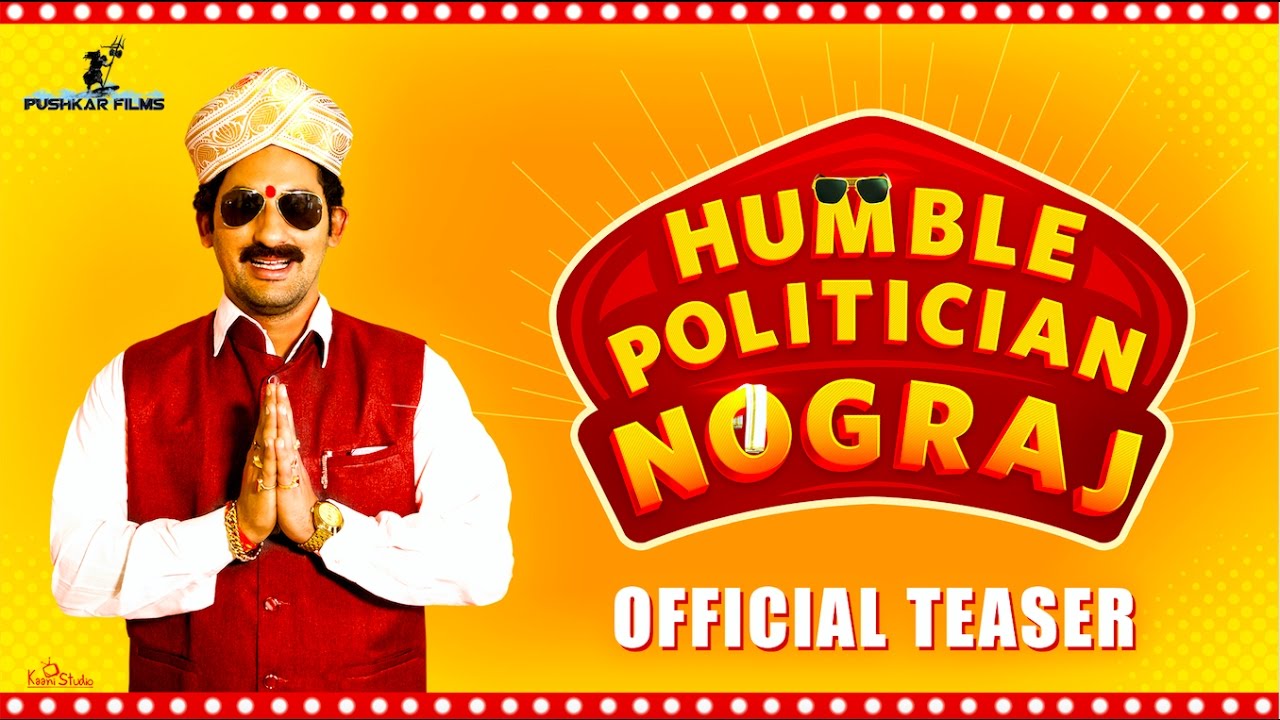 HUMBLE POLITICIAN NOGRAJ: A Laugh Riot! Here we have for you the teaser trailer of Humble Politician Nograj!

The most awaited trailer of 2017 is here. We are as excited as you are to see Danish Sait in a new avatar. If you are on Facebook or listen to the radio, you are bound to know who Danish Sait is, oh sorry! Who Humble Politician Nograj is. He is obviously our only favourite politician in Karnataka.

Of the many interesting things in the movie, the first and foremost thing that catches our attention is the amusing title “Humble Politician Nograj”. While titles have traditionally been associated to storylines of movies or the names of the lead characters, we see a surge in the number of new-age movie titles giving an insight into the genre of the movie, especially if it’s a comical movie, and Humble Politician Nograj has managed to pack all these elements in a single quirky title.

Nograj is a funny politician who speaks broken English and robs people’s money. He is a loud and infamous politician who poses as a polite, sensitive, honest, soft and charming person because he is a ‘humble’ politician. The teaser begins with Nograj robbing a house with his assistant, and when his assistant expresses doubts about the robbery, Nograj says “Naavu politicians” so robbing shouldn’t be a problem.  He prefers speaking in English, because it is difficult to cheat Kannadigas in Karnataka, by speaking in Kannada. A few shots in the teaser reveal that the movie addresses important political issues.

The titular role, Nograj sports a thick moustache, coolers, gold chain and bracelets, and bottu. Nograj dances in public, speaks broken English and addresses himself as “Humble Politician Nograj”. One look at Nograj evokes laughter. His wife is equally funny, and the romantic shots revealed in the teaser, are nothing like anything we’ve ever seen before. There is a parallel lead in the movie who seems to be a young politician who claims that he cares about the welfare of the city and the state, and is not interested in personal gains.

The motion-picture quality is amazing, and the background score goes well with the movie. The trailer is so full of life, sarcasm and of course, comedy. We should admit that the trailer itself cracked us up, so imagine how funny the movie is going to be.

Saad Khan has previously directed the movie, Station, a Hindi crime-thriller. He is known to promote fresh talents. This is his first full-length Kannada movie. In a recent interview to a popular daily, Saad Khan stated that politics runs on agendas, and nobody cares about the people, and Humble Politician Nograj addresses issues related to politics, but not in a preachy way, and the movie will make sense to the public.

Though Humble Politician Nograj is his debut movie, Danish Sait is immensely popular in Karnataka. He is a famous radio jockey, TV presenter, and emcee. He is also Bangalore’s favourite  RCBian Mr.Nagz. He plays the title role, Nograj in this movie. His social media accounts are already flooding with compliments about his look, and performance in the teaser.

This is Sumukhi Suresh’s debut movie but she is known for her role as Sumukhi Chawla in the mockumentary web series, Better Life Foundation. She is also a writer and a stand-up comic. She essays the role of Nograj’s wife in this movie. Her chemistry with Danish Sait looks fabulous in the shots that we got to see in the teaser. When we mention “Chemistry”, do not expect anything non-humorous or serious.

Roger Narayan is a popular model and actor who has starred in several Hollywood movies and TV shows. He also featured in the Kannada thriller movie, U-Turn in 2016. He is proficient in the language. He plays a counterpoint role to Nograj, in this movie. His shots in the teaser show him as a serious young man actively involved in social issues.

Sruthi Hariharan predominantly works in Kannada movies. She debuted with the movie Lucia in 2013. Lucia fetched her a SIIMA Award Nomination.  She has a string of South Indian movies to her credit. Sruthi essays the role of Roger Narayan’s wife. She is one of the main leads in the movie. Director Saad has stated that Sruthi’s character in Humble Politician Nograj is pivotal, and brings an interesting perspective to the movie.

Vijay Chendoor has quite a few movies to his credit. He comes from a background of horror movies and is known to bring laughter in serious situations as well. He plays the role of Manjunath, Nograj’s trusted assistant.

This movie has an interesting team of producers. Pushkar Mallikarjunaiah, Hemanth M Rao, and Rakshit Shetty are producing the movie under their banners Pushkar Films, Paramvah Studios, and Lost And Found Films. This trio had worked wonders with the movie Godhi Banna Sadharana Mykattu, but this time they are all teaming up as producers. Rakshit Shetty stated that he is excited to be a part of the creative team of Humble Politician Nograj and that the audience will laugh their lungs out while watching the movie. The producers share a great rapport on-screen, and off-screen.

Karm Chawla is the cinematographer of this movie. He has done appreciable work in Ulidavaru Kandanthe, and Kirik Party. Jagadeesh is the editor of the movie, and Jeet Singh is the music director. Danish Sait and Saad Khan are the script writers. Danish has also written a few dialogues. The other dialogue writers are Vamsidhar Bogaraju, and director Saad Khan. Viswas Kashyap is the art director of the movie.

The teaser runs for 1 minute and 49 seconds. Though it is a bit long for a teaser, we do not experience a single dull moment anywhere. We wouldn’t have complained even if the teaser was a longer one. From what we gather from the teaser, the movie is going to be a breath of fresh air in Sandalwood. The teaser leaves the audience in splits, and takes our expectations a notch higher. The movie is expected to be a thorough entertainer packed with comic elements and social messages. No doubt this movie will bring tears in your eyes, only because you’re going to be laughing your seats out.