An unimaginative thriller is a terrific form which will be stuck in your head. Showing the fuzziness of romance and drama, the film is directed by Mohan Krishna Indraganti. For a change, he has opted action-thriller that reflects bravery throughout. A story of cat-and-mouse, shared by the brilliant actors, Nani and Sudheer Babu is an action drama between both the performers.

Sudheer Bahu, playing the character of DCP Adithya is an intrinsic cop in Hyderabad. Not only a smart one, but he has made his place on the cover page of a magazine, aloof of the prevailing crimes in the city. To his achievement, he has always been one step ahead of the crime. 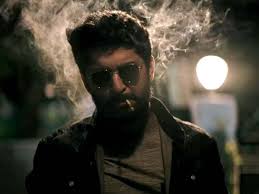 When one of his fellow policemen naming Prasad got killed, he leaves no stone to unturn in investigating in the case. And to his knowledge when he gets to know about a psycho killer Vishnu and his puzzles, we see how DCP Adithya is always a step behind of the killer’s plan.

Also, he gets a very detailed introduction scene in the middle of the riot scene and to convey his body, he gets the opportunity to show off his abs, which makes it an obvious scene as a DCP character.

V or Vishnu, played by Nani also gets attention from a nicely set stage scene, when he emerges from the smoke. So, the deal was fair between both. But somewhere Vishnu falls short of temptation, because of the storyline. The predictability of the character makes it less fascinating.

Throughout the film, Vishnu will lead the DCP Adithya, but he will always miss him by a second. This template goes for continuous five murders, making it an obvious expectation. Hence, too predictable at some point. To interest is the newness of cops on dealing every time with new clues.

Both of the artists have an intriguing character in the film. Vishnu and Adithya have a very prominent role throughout. While the film also has some stellar cast like Aditi Rao Hydari, Nivetha Thomas, Vennela Kishore, and Harish Uthaman which are scripted in a dramatic way to increase the intensity of the film.

The film has too many scenes where you already know what is to happen next. Hence, the film has the disadvantage of a patterned graph. There are no ups and downs, most importantly no excitement or thriller feeling throughout the film.

Even in the intense scene like murders, DCP Adithya reflects no expression or emotion to lift the scene. Hence, no surprise or amazement. But commendable jobs of both the primary artist forces to wait till the end. Vishnu, Nani, will serve you with some dark comedy that will lighten up your intense mood, thinking to why he is killing the culprit.

Mohan Krishna has keenly scripted the characters of the film, making Sudheer Babu an appropriate choice for the cop character.

Interesting Read : Masaba Masaba Review: Too Hot to be Messy

Making it a watchable one, the film has some intriguing scenes, like when Nani makes fun of the renowned director K Raghavendra Rao. On the other hand, Nivetha Thomas, playing the character of a wannabe crime novelist lives up to her magnificent role. From a scene, she states, that she isn’t a girl, who wishes to play with teddy bears, whereas in her intimate scene with Sudheer Babu completely contradicts.

Saheba, played by Aditi Rao Hydari will stick in your heart. The delicacy you will witness will wipe away all the stress you were carrying. With limited screen time, she will kill you with the expressions. Her love interest with Nani will be a refreshing one to acknowledge and the Manasu Maree song will be the icing on the cake for the viewers.

To lure the watchers, PG Vinda’s cinematography will create a vow moment every time there’s a new frame. And, the SS Thaman’s background score will take you back to the Tamil film, Ratsasan.

Under the prominent list of the crew, the film still lacks a lot of thrillers, suspense and drama, which could have been better. But In certain scenes, the film itself brings the elements to watch it otherwise. What better is in this time of rampant is to watch a film on the release day on the TV or laptop rather than in a theatre’s first day first show.

Where to watch– Amzon Prime Videos