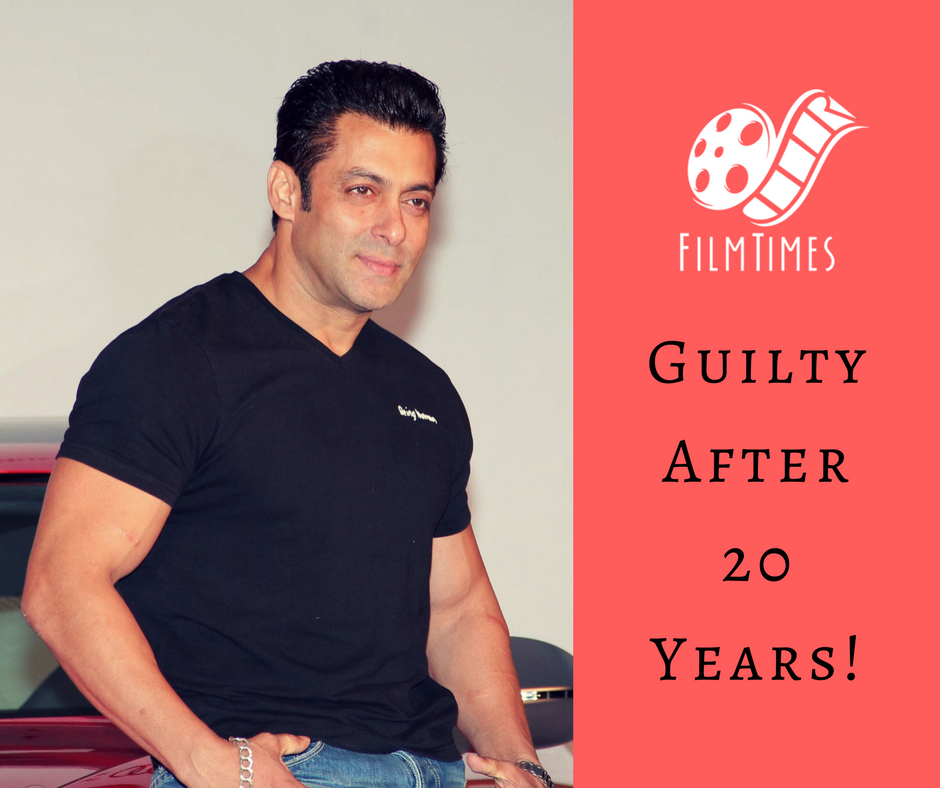 Actor Salman Khan has been held guilty and is convicted under Section 9 and Section 51 of Wildlife Protection Act. Section 9 prohibits hunting, while Section 51 provides the penalties. The amended act attracts between three to seven years in jail. But in retrospect, Khan will face a maximum sentence of six years.

Following are the incidents that occurred:

During the Shoot of the hit Bollywood movie Hum Saath Saath Hain in October 1988, Salman Khan along with his co-stars Saif Ali Khan, Neelam, Sonali Bendre and Tabu were accused of killing two blackbucks in the Kankani village of Jodhpur. Who then were booked under the Wildlife Protection Act which prohibits the hunting of black bucks.

The Trial Court convicted actor Salman Khan on 10th of April 2006. He was fined Rs.25,000 and was sentenced to an imprisonment of 5 years. He then spent a week in the jail before getting bailed out.

On 31st August 2006, Rajasthan High Court put forward an order by suspending the Trial Court’s decision. The actor was not allowed to leave the country without prior formal permission.

Later on July 25th of 2016, Rajasthan High Court said that there was no evidence to prove that any animal was found shot dead by the actor’s licensed gun and hence the actor was dismissed of all charges from the blackbuck poaching case.

On 11th November 2016, Supreme Court issued a notice to Salman Khan on an appeal by the Rajasthan Government.

On March 28th of 2018, the blackbuck poaching case arguments were concluded in the Chief Judicial Magistrate Rural Court in Jodhpur and the final verdict was to be announced on the 5th of April 2018.

Today, the 5th of April, Salman Khan has held guilty of the blackbuck poaching case. The other actors like Saif Ali Khan, Tabu, Sonali Bendre and the rest have been relieved after being acquitted from the case. The Discussion is on for the quantum of punishment. If the quantum of sentence is more than three years, then the convicted actor Salman Khan will have to spend the night in the Jodhpur Central Jail on Thursday.

The quantum of punishment is more likely to be a sentence of 2 years of Jail imprisonment along with a fine of Rs 50,000. Salman Khan is most likely to get a bail from the Sessions Court on Thursday if the jail term is below three years.