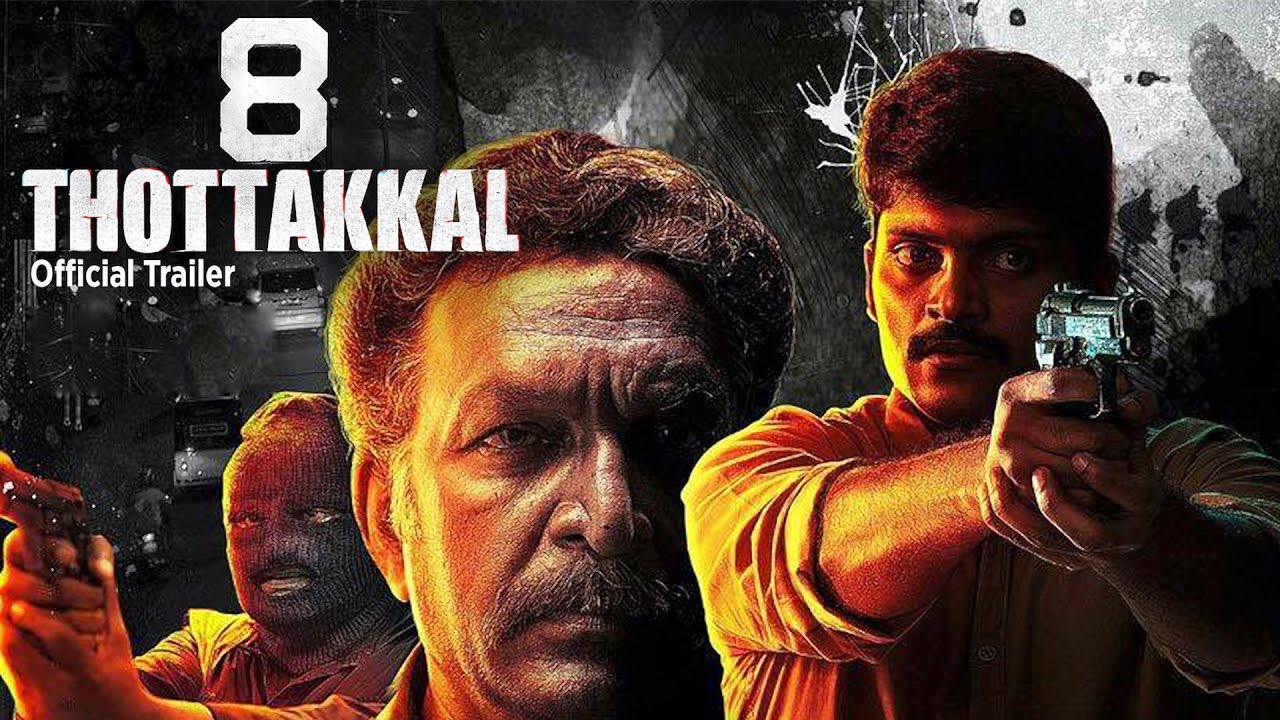 Single liner: The story revolves around a police officer, Satya (Vettri) who loses his gun and is given 24 hours to get back his gun.

Review: Sri Ganesh’s movie 8 Thottakkal is a depiction of the classic old film, Stray Dog by Akira Kurosawa.  Satya (Vetri), a young boy is falsely accused of a murder and is put behind the juvenile bars. He is afraid and helpless and loses his belief in humanity. He dismisses the thought of becoming a Police Officer in the future when someone asks him by saying – ” Police velai ah, vendam” (I’d never become a cop).  That is exactly what we see as the present in the movie at the West Mambalam police station.

Vetri’s character is well crafted keeping in the mind of the baggage that he carries from his childhood. Due to compulsion, he joins as a police officer. He is a good person amidst several other corrupt officers, who helps people whose complaints go unheeded. He loses his official weapon as a cop and is given 24 hours to hand over the weapon to the inspector. However, he fails to uncover this mystery and is suspended.

From this point, the movie keeps you on a grip and turns the emotional quotient of the audience. The script is well crafted and despite being a debut director, Sri Ganesh knows the nifts-grits of a thriller script. At the same time, he slow boils the movie with unnecessary songs in between which poses a threat to distract the narrative.  The movie aims to authenticate a small world with commoner problems. The art of layering the characters is well made with black and white hues.

Pandian (Naseer), a senior police official further involves in this case to investigate and through his investigation, we learn that the gun is in the hands of a gang of commoners. Ganesh enlightens the audience about the agenda behind their motive. It is to simply live, love/hate, survive.

Meera Vasudevan (Aparna), essays a role of a journalist in the movie, Vetri falls in love with Meera when he sees the ability in her to stand up against the inspector Gunasekaran (Mime Gopi) when he does injustice towards an elderly typist (R.S. Shivaji). Certainly the love interest lumbers the interest of the plot and does not do justice to the narrative. In a moment of vulnerability, Vetri tells Aparna about his past. On learning his past, Aparnka shrinks away  from him. Aparna’s character disillusions Vetri, because she wrongs the right in him.

M.S. Bhaskar, owns the movie with the exceptional portrayal of the character, Moorthy. This character is plain, simple & obedient, but he snaps at the epitome of revelation. Vetri’s character demands great traits and Satya’s portrayal and diminutive. Naseer, surpasses his character of Pandian with great professionality.

There are setbacks regarding the portrayal of the police procedural, the love shared between Vetri & Meera, and the long monologue quoted by Bhaskar at the end. The movie focuses on one gun, 8 bullets, and a crime. You can look up to M.S. Bhaskar’s exceptional acting. 8 Thottakal is a great story with a simple motivation of big revelation.