Movie Plot: A military pilot recalls a romance with a doctor while being held prisoner in Pakistan. The movie revolves around a Squadron Leader Varun aka VC (Karthi) and a doctor Leela (Aditi).

Movie Review: Kaatru Veliyidai is a classical poetic love story with a modern twist. Mani Ratnam has always made his audience feel edgy by emoting unique, offbeat, flawed personalities with great buoyancy. VC is a self centered, arrogant man who portrays his rock solid magnetism to the outer world, but masks his deep & soft personality. On the contrary Leela, who looks fragile and vulnerable is intense and headstrong. Mani never fails entwine two different personalities through the art of magical realism.

The master works of Mani Ratnam, lets your mind wander like a meander, looking for several interpretations and observations. From Mouna Ragam to Kaatru Veliyidai, his idea about LOVE has been constant. The mnemonic that he uses for love is “All is fair in Love and War”.

Karthi (VC) is flamboyant but fails to move the audiences with his expressions and emotions. His mental trauma, transforms his self centered attitude and exposes his brim of emotions of love to Leela. Nidhi (Rukmani), exposes VC’s personality when she tells to Illyas Hussain (RJ Balaji), “I like you, you like Leela and she likes VC but VC likes only himself.” 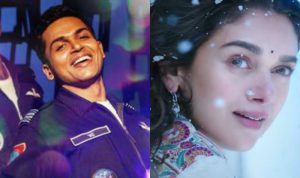 [blockquote author=”” pull=”pullright”] His character portrays the life of men at the airbase, trying to fight their patriarchal thoughts with the worrying about the future and lives with chaos of past and present.[/blockquote]

Aditi (Leela) steals the limelight of the movie, effortlessly by moving the audience with her acting and expressions. Aditi’s personality also undergoes several transformations. She is unstable, is at constant pressure, and dilemma. And this can be observed in this dialogue – Nee enna rani pola madhikire, illena kizha potta midhikire (either you hail me like a queen or trample all over me).

The pure emotions of love, anger, excitement, fun, hatred are salt & peppered with A.R. Rahman’s music & Ravi Varman cinematography. A.R Rahman soundtracks have already been hit on the internet. Mani diffuses difficult situations through Bharathiyar poetry and captures every scene with a picturesque background to balance with calm and intensity.

Overall the movie keeps you on edge and gives an insight in love, being eternal. The movie is worth the watch to understand a new angle of love with two extreme personalities that molds & transforms into a new character.